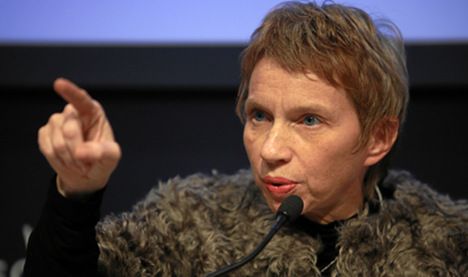 At a monthly press conference in Paris, Parisot said: “We all have the feeling of living a very serious moment, historic, a moment of truth.”

The main reason for concern according to Parisot was “the future of the eurozone.”

Having just returned from a B20 meeting of bosses from the world’s leading economies in Mexico, Parisot said that “among French, European and non European bosses, you could feel the anxiety, the concern was great.”

The way forward, she suggested, was “a giant European step” towards greater integration.

Technical considerations were “secondary to the need for a new governance that is more democratic, simpler, clearer and more accessible.”

“We call today on European political leaders, regardless of their party, to act as statesmen and provide momentum” that could take the European Union beyond “classical schemas,” Parisot said.

The French boss said she was convinced that new French President Francois Hollande was “conscious of how serious the situation is.”

Parisot added that observers were convinced “that everything depends on the Franco-German couple” and that “something determined has to happen at that level.”

Relations between France and Germany have cooled since Hollande took office but analysts note that the two biggest eurozone economies have always reached compromises in the past that allowed the bloc to move forward.

Meanwhile, Parisot also warned that the French business sector was “seized by a kind of dismay” and feared being “strangled” by shrinking profit margins, falling orders and treasury tensions.

She urged Hollande and the newly elected, Socialist-dominated French parliament to “weigh the circumstances and think about their decisions in light of that.”

Business investment and hiring could suffer from uncertainty faced by French companies, she said.

Earlier on Tuesday the national statistics office INSEE reported that French industrial sentiment had dropped by one point to 92 points in June, pushing further below its long-term average of 100.