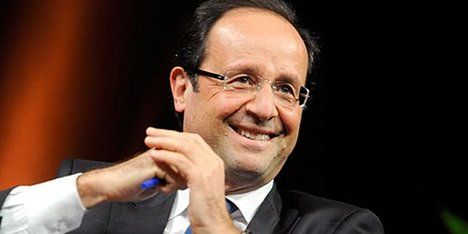 The Twitter message by Hollande’s companion Valérie Trierweiler wishing good luck to an opponent of Ségolène Royal – the president’s ex-partner and mother of their four children –livened up an otherwise lacklustre campaign.

But despite the scandal, pollsters say Hollande’s Socialists and their parliamentary allies are on track to take control of France’s lower house National Assembly.

Hollande, who defeated rightwinger Nicolas Sarkozy in May’s presidential election, has urged voters to give him a majority as he seeks to steer France through Europe’s debt crisis, rising unemployment and a faltering economy.

A study by polling firm IFOP released Thursday showed the Socialists and their parliamentary allies set to win 297 to 332 seats, more than enough to secure a majority in the 577-seat National Assembly.

The Socialists and other left-wing parties came out on top in last Sunday’s first round, winning 46 percent of the vote to 34 percent for Sarkozy’s UMP party and its allies.

But after a record low turnout of only 57 percent in the first round, Prime Minister Jean-Marc Ayrault urged supporters at a rally this week to keep working for a “large, coherent and unified majority”.

“The game is not over. Previous parliamentary elections showed that a number of seats can play on a few dozen votes. We must mobilise, mobilise, mobilise to convince voters right up to the last hour,” he said.

The vote will also be a key test for Marine Le Pen’s anti-immigrant and anti-EU National Front (FN), which took 13.6 percent in the first round – far above the four percent it won in the last parliamentary election in 2007.

Le Pen, who said the result confirmed her party’s position as France’s “third political force,” is hoping the FN will be able to take a handful of seats including one for her in a rundown former mining constituency near the northern city of Lille.

The UMP has reached out to the National Front’s voters, urging them to switch from the far-right to keep the Socialists from victory.

“I am telling the FN’s voters: be careful when you vote for the FN in the second round, you risk putting the left in power,” UMP leader Jean-François Cope said this week.

The UMP rejected the idea of forming second-round alliances with the FN but, despite calls from the Socialists, refused to pull its candidates from three-way races to ensure far-right candidates did not get elected.

The only potential hiccup in the Socialists’ campaign was Trierweiler’s tweet, which the right jumped on as an embarrassment to Hollande.

The tweet wished luck to Socialist dissident Olivier Falorni, who is running against Royal for a seat in the western town of La Rochelle and was ahead in one poll this week with 58 percent of the vote.

There has long been speculation of intense rivalry between Royal and Trierweiler.

Hollande stood loyally by Royal as she battled Sarkozy for the presidency in the 2007 race, but he had reportedly been in a relationship since 2005 with Trierweiler, a twice-divorced 47-year-old mother of three.

The UMP said the tweet was an inappropriate intrusion of Hollande’s personal life into politics, but analysts said that despite widespread media coverage it was unlikely the scandal would have much impact on the Socialists’ chances.

The IFOP study said 13 to 20 seats are also expected to go on Sunday to the Greens, who are close allies of the Socialists and already in government, so Hollande is all but certain of majority backing.

The FN are set to win up to three seats, including potentially for Le Pen and for Marion Marechal-Le Pen, the FN leader’s 22-year-old niece, in the southern Vaucluse area.