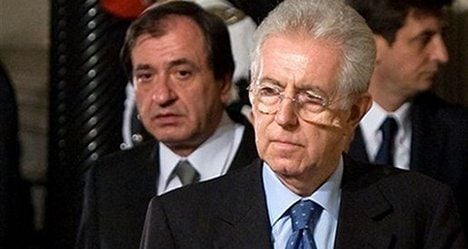 The pressure on EU leaders to agree crisis measures has intensified in the wake of Spain’s appeal for aid and ahead of a Greek election which could force Athens out of the eurozone, with potentially dire results for Italy.

The meeting, which comes as Prime Minister Mario Monti seeks to secure allies as the crisis spirals, marks a move to widen eurozone debt talks to beyond the usual Franco-German alliance, giving Italy a more prominent role.

Thursday’s talks are likely to focus on growth and debt management and will lay the ground for an important Rome summit between Italy, France, Germany and Spain on June 22, and a crucial EU leaders meeting in Brussels on June 28-29.

Hollande’s Rome visit “is a sign that Paris wants to take advantage of the experience” of former European commissioner Monti, and is an attempt to “widen the circle beyond the tete-a-tete” with Berlin, a diplomatic source told AFP.

Monti and Hollande, who met at Camp David and in Chicago last month, “want to work on common proposals” to tackle the debt crisis, sources said. Both have pushed for the EU to agree more measures to boost the economy.

Italy and France also favour the use of eurobonds and other new instruments as a way of reducing borrowing costs for the eurozone’s weaker economies.

EU leaders may be running out of time to agree on implementing the proposal – long resisted by Germany – as Italy, the eurozone’s third largest economy, scrabbles to keep itself away from the brink of the debt-crisis sinkhole.

In a sign of growing frustration over the lack of a common strategy, Monti insisted Tuesday that eurozone leaders should “strengthen European economic governance to create consistent and not conflicting growth measures.”

His government, which took over from Silvio Berlusconi’s centre-right team late last year as the crisis hit, has been playing down the risk of contagion, insisting that “Italy’s situation is very different from that of the others.”

On Tuesday the premier slammed as “totally inappropriate” Austrian Finance Minister Maria Fekter’s suggestion that Italy may be forced to follow stricken Spain into begging for a financial rescue because of its high borrowing costs.

In an interview with German radio ARD, Monti said Italy “will not need a bailout even in the future” and called on the markets and financial observers “not to be governed by cliches or prejudices.”

Meanwhile, Il Sole 24 Ore business daily said that Rome was preparing “necessary measures to boost trust and avoid contagion” for an Italy “under attack”, while La Repubblica newspaper warned of “a race against time.”

For recession-hit Italy the key is growth, but both Monti and Hollande warned ahead of Thursday’s meet that this cannot come from wild public spending.

Some economic watchers have touted Monti as a possible “bridge” between the different crisis-busting stances held by France and Germany.

Others question whether the bespectacled professor wields the necessary authority to oversee a new deal in the face of a political deadlock in Greece and severe difficulties in the Spanish banking sector.

Greeks go to the polls on Sunday amid fears that angry austerity-hit voters may elect the radical Syriza party that has vowed to tear up bailout package agreements – a result which would probably see Athens exit the eurozone.

Furthermore, excitement over an agreement to rescue Spain’s stricken banks faded quickly to leave a jittery global economic community wondering whether the loan, worth up to €100 billion, would be enough.

Skittish investors fearing a knock-on effect from Spain to Italy caused stock markets to plunge, while the yield on Spanish and Italian bonds spiked.

Italy’s 10-year government bond yield leapt to a high of 6.197 percent from the previous day’s closing level of 6.03 percent.

Economic observers have said Monti will have to act fast to reassure those who think Italy’s public debt mountain of 1.9 trillion euros, and its struggle to boost growth, places it at high risk of succumbing to the crisis fever.