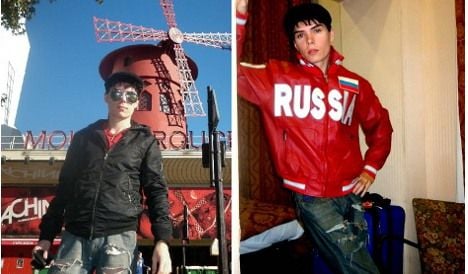 Luka Rocco Magnotta is subject to an Interpol arrest warrant, a so-called red notice, after Montreal police identified him on May 30th as a suspect in the murder of Lin Jun, a 33-year-old Chinese man who had been reported as missing by his family a week before.

Magnotta is suspected of having filmed himself as he dismembered his lover Lin Jun whose body parts were then mailed to a series of addresses in Canada.

The 29-year-old Canadian who is known to have lived under a number of aliases, was born Eric Clinton Newman. Importantly for police, he is accustomed to changing his appearance.

In addition to having had plastic surgery on his face — apparently to look more like James Dean — he often wears lipstick and make-up, has dyed his hair and worn wigs, and sometimes dresses up as a woman.

Described as handsome but narcissistic, the 29-year-old, who naturally has black hair and blue eyes, has also changed his name and used several aliases.

He was convicted under his birth name for defrauding several retailers and with stealing $16,900 from a woman in Toronto, culminating in a suspended sentence and probation in 2005.

A series of judge imposed conditions reportedly banned him from owning or using a camera or a computer, and from accessing the internet.

Born in Toronto, family members told reporters they lost contact with him some time ago.

For years Magnotta built a profile through blogs, escort adverts in which he searched online for sex partners, and posted photographs showing himself as a fit, pouty-lipped model and traveler in cities, including Paris.

He used the name “Angel” when working as a prostitute and stripper at Remington’s, a well-known gay bar in Toronto, according to transsexual performer Nina Arsenault, who claims to have had a relationship with him.

The one-time supporter of white supremacists posted a video online of two kittens being suffocated in a plastic bag, according to the Ottawa Citizen newspaper, ending an online hunt for the so-called “Vacuum Kitten Killer.”

At the same time, profiles he reputedly posted on online dating services conveyed an altogether different persona — on one website he listed beach volleyball as a hobby and stated that finding a long-term relationship was his priority.

He was granted a license to work as a stripper in Toronto in 2005 and also worked as a male escort.

Pierre Bonhomme, a Canadian filmmaker who recalled a meeting with Magnotta in Toronto in 2007 or 2008, told the Ottawa Citizen it was a “creepy” experience that he quickly decided to escape from.

“I left within about five minutes. It was a really uncomfortable, awkward situation. He was in the shady, druggy, gay-sex prostitution world. He was on a lot of the gay hookup sites,” Bonhomme said.

Magnotta used Russian names, including the alias Vladimir Romanov, on such sites, according to Bonhomme, who also attested to the suspect’s willingness to use fraud and deception.

“He was a hustler,” Bonhomme said. “He was definitely not a gay village kind of guy. He was more of a suburban guy on the Internet, scamming married guys, that kind of thing.”

With Magnotta now a fugitive, probably in France, a 2009 posting he made on the Internet offered advice on how to vanish and never be found.

“A minimum of four months is really necessary to carry out the heroic actions necessary to leave your old life behind,” he reportedly wrote.

He said a person must withdraw from all social circles, possess two sets of false identification papers, convert all assets to cash and then take a bus to a chosen destination, after selling a car somewhere else to mislead police.

Magnotta has apparently not done such a good job of staging his own disappearance: investigators believe he boarded a France-bound plane on May 26th in Montreal and police traced his cell phone signal to the suburb of Bagnolet on Saturday.

But he remains on the run. Psychologist Gilles Chamberland told Radio Canada that Magnotta exudes “narcissistic, anti-social,” behavior, having described himself as being “incredibly beautiful.”