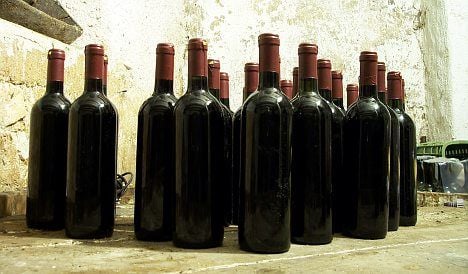 Wines, forests, ancient manuscripts, race horses, watches and classic cars are some investment options, either via shares in affiliated companies or mutual funds.

Wine, and especially highly sought-after vintages, are attracting attention now that the market has begun to recover from the after-effects of a market bubble.

An example is La Financiere d’Uzes, a family-owned investment company that has launched a mutual fund baptized “Uzes Grands Crus.”

“The idea is to consider a vintage bottle of wine as an investment, a new asset class on the order of stocks, and to move from the logic of a consumer to one of a financier,” chief executive Dominique Goirand said.

Goirand stressed that the fund is the first of its kind to be declared with the French financial markets watchdog AMF, but professionals warn it is a “contractual” fund that pools assets from investors who know the sector well.

Classic vintages purchased by Uzes are chosen according to precise criteria, with wine expert Hugues Lapauw explaining that “we buy what we believe to be underpriced following a comprehensive analysis.

“For quality, we base our choice on a panel of 25 tasters. We do not look for collectable wines, nor for vintages that are more than 10-15 years old.”

Uzes plans to invest 75 percent of its fund in wines, with at least half of that in wines produced in the Bordeaux and Burgundy regions and the rest from other French vineyards and other quality producing regions around the world.

The wines are purchased from distributors or on the London-based Liv-ex Fine Wine Exchange.

Uzes has set a goal of earning more than investors can earn on five-year French bond markets, a modestly ambitious target.

Having the AMF “stamp” helps Uzes to set itself apart from similar investment funds sprouting up in countries with more favourable fiscal regimes, such as Luxembourg.

“Nobles Crus” is based there and offers to “create emotion in finance” by investing selectively in rare and very old wines.

That fund’s managers claim aggregate earnings of 71.5 percent since the fund’s creation in January 2008.

Other wine-based funds have sprung up in France, with “Patrimoine Grands Crus” offering shares in wine caves and “La Bergere” or “Patriwine” selling stakes in their respective distribution activities.

Independent wealth manager Anthony Calci cautions however that such investments belong to the “exotic” category of relatively risky financial bets.

Meanwhile, other funds allow investors to share in the ownership of ancient manuscripts, autographs, or collector watches.

And in 2011, former Pink Floyd drummer Nick Mason launched a fund to build a reserve of classic cars.