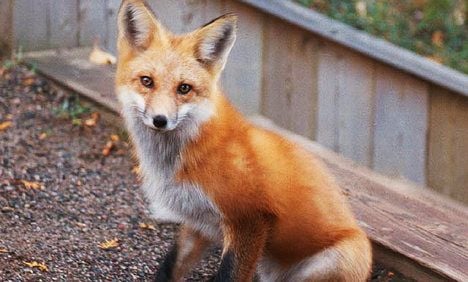 Bamby the boar was taken in by Yvan Blaise in February 2011. He said he would rather die than be separated from his adored pet.

In France, raising a wild animal without special authorisation is illegal.

On Monday, authorities said they would find a “humane solution” to allow the two to stay together.

The news about Bamby has given hope to the Delanes family in the south-western town of Bergerac.

The Delanes took in a young fox in April 2010 after finding him lying by his dead mother on the side of the road. She had been run over by a car.

The fox, who they named Zouzou, was raised like a family pet, eating dog food and drinking water from a dish.

The family has two children and cats, but say they had no problems with Zouzou.

The day before he was due to be taken away, the fox mysteriously disappeared.

“He is in a safe place,” Ana-Paula Delanes told newspaper 20 Minutes.

Around 12,000 people have joined a group to support the Delanes family in their quest to take back legal possession of Zouzou.

Their latest tactic is to bombard authorities in the Dordogne region where they live with emails and letters.

The case of Bamby the boar is not the only one. Ana-Paula says a similar case in the Dordogne region allowed a female boar, Mimine, to live with her owner.

“It seems like they have a particular problem with foxes,” she said.

The Delanes family is due to have its appeal heard on October 2nd.