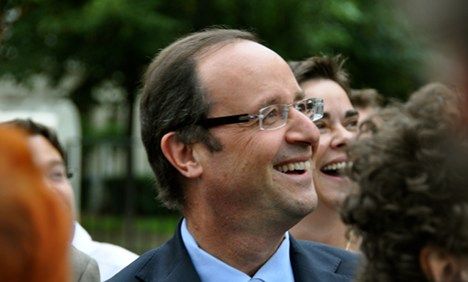 Hollande could already consider himself unlucky with the one-in-a-million lightning strike that delayed his visit to Berlin to see Chancellor Angela Merkel and his luck with the weather did not improve as he arrived in Germany.

Where two hours before there was sunshine, unseasonal drizzle ensured Hollande suffered his second dousing of the day as he arrived at Merkel’s squat grey chancellery for crunch talks on the eurozone debt crisis.

Merkel was all smiles as she greeted the new president and appeared relaxed throughout. Hollande, on his first foreign trip as France’s leader, seemed stiffer and less at ease, only sometimes cracking a smile.

The leaders of Europe’s two powerhouses engaged in a brief handshake — gone the kisses on the cheeks Merkel had with Hollande’s predecessor Nicolas Sarkozy — then squelched onto the red carpet, flanked by a military band.

Waving briefly to a handful of onlookers huddled under umbrellas, the two leaders stood side-by-side for the two national anthems, she in her customary pose with hands clasped at her front, he almost standing to attention.

With the build-up to the meeting dominated by fears of a clash, the two literally clashed physically at one point on the red carpet, Merkel gently ushering Hollande back on track.

The journey across the Rhine was anything other than auspicious, with Hollande’s presidential Falcon forced to return to Paris “for safety reasons and as a precaution” after being hit by lightning.

At the highly awaited news conference, Merkel said the fact he made it to Berlin despite the unlikely event of a lightning strike was “maybe a good  men

They made the most of what they could agree on, but Hollande warned ominously that “everything was on the table” concerning EU economic policy, ahead of a meeting of European leaders in Brussels on May 23rd.

“This meeting wasn’t intended to answer all the questions that have been asked, but was mainly meant for us to get to know each other better, to

establish ties, a working method, to find a solution together” to the crisis, said Hollande.

To a journalist’s question as to what language they spoke to each other, Merkel said they conversed “mainly in their native tongues” apart from a few words of English while waiting for their interpreters.