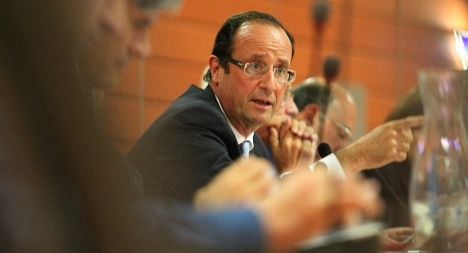 Boosted by an endorsement from centrist Francois Bayrou, Hollande urged voters to hand him an “ample victory” on Sunday so he would have a strong mandate to implement his left-wing programme and fight EU-driven austerity.

Polls showed Sarkozy, who insisted the race was still close, narrowing the gap slightly but still five to seven points behind the frontrunner.

“I want an ample victory,” Hollande told RTL radio. “If the French people must make a choice, they should do so clearly, overwhelmingly, so the winner has the capacity and means to act.”

Increasingly confident, Hollande said he would get to work straight away.

“I will have no grace period,” he said. “The country’s problems will not disappear with the eventual departure of Nicolas Sarkozy. He won’t take the public debt, unemployment and social problems with him.”

Sarkozy, the first incumbent to ever lose a first-round vote, said the race was not over and urged the “silent majority” to back him at the polls.

“I want to convince you of one thing: every vote will count,” Sarkozy told supporters in the western coastal town of Sables d’Olonnes. “You cannot imagine at what point things will play on a razor’s edge on Sunday.”

“I don’t think anyone wants France to be in the situation that Spain is in today, after seven years of Socialist government,” he told Europe 1 radio.

“Look at Spain,” Sarkozy said. “Do you want the same situation? The issue isn’t to frighten. The issue is to look across our border” where unemployment recently hit 24.44 percent, the highest in the industrialised world.

Hollande was to hold a final rally later Friday in the southwestern city of Perigueux, before the campaign officially ended at 2200 GMT, with no political speeches or opinion polls allowed until voting stations close on Sunday.

The last week of the campaign was marked by fierce exchanges and a dramatic television debate that saw the contenders trade insults without either landing a knock-out blow.

The French left has not won a presidential election in a quarter of a century, but fears over low economic growth, rising joblessness and European Union-imposed austerity have given the Socialists a boost.

Many voters also disapprove of Sarkozy’s flashy style during his five-year term and have welcomed Hollande’s vows to be a “normal president.”

Bayrou late Thursday announced he would be voting for Hollande, despite concerns about the Socialist’s commitment to deficit reduction.

While Bayrou said he would not instruct the nine percent of the electorate who voted for him in the first round to vote one way or another, he said he had been offended by Sarkozy’s lurch to the right since the first round.

“I, personally, will vote for Francois Hollande,” he said, expressing regret that the incumbent was pursuing the support of the 18 percent of the electorate that backed the far-right’s Marine Le Pen.

Sarkozy has moved increasingly to the right ahead of the second round, vowing to “defend French values,” limit immigration and strengthen France’s borders.

The latest polls released Thursday and Friday showed Hollande ahead with 52.5 to 53.5 percent of the vote, with Sarkozy gaining between 0.5 and 1.5 points in the last days of the campaign.

Hollande’s confident campaign team said Friday it was already preparing for a transition.

“As in other countries, a transitional phase will take place. It will last more or less a week as Nicolas Sarkozy’s mandate ends on May 16. It could be a little before,” campaign chief Pierre Moscovici said.

“During this transitional phase the teams and first measures will be prepared,” he said.

He also said Hollande would take part in an informal EU summit at the end of May or early June if elected, to prepare for a full summit on June 28-29 that is expected to focus on economic growth.