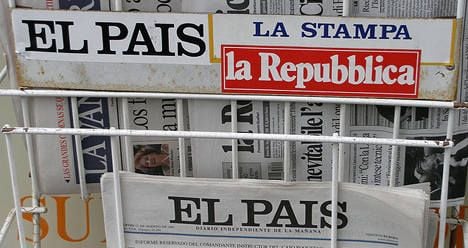 French households watched in their millions – almost 18 million tuned it – as each candidate accused the other of lying, at the worst point Sarkozy calling Hollande a “little slanderer”.

This morning, the French press has been awash with round-ups and analysis.

Media website Rue89 was scrupulous with their analysis of each candidate’s claims.

Immigration was one of the most heated topics of the night, with Sarkozy trying his best to attract the far right vote, and Hollande desperate not to repulse them.

In a rare moment of agreement, they both said they backed from the beginning, and would continue to enforce, the law banning the burqa.

But on illegal immigration, Sarkozy claimed Hollande wanted to close asylum centres in France, quoting a letter Hollande had apparently written to the French asylum association.

Rue89 was quick to claim this accusation as false, quoting from the original letter that Hollande hopes the centres “become an exception rather than instrumental to the immigration procedure”, and wishes to find alternatives.

The website also dispelled Sarkozy’s accusation that Hollande didn’t have a full grip on the reality of public spending. His proof? A socialist initiative which would give some high school students iPads in the town of Corrèze, central France.

But, after speaking to financial experts, the €1.5 million cost of this programme would have a “limited effect” on French economy.

Le Monde had their fact checkers working through the night to find out the ultimate truth behind each of the candidate’s accusations too.

During one dispute on whether former Italian Prime Minister Silivio Berlusconi was aligned with Sarkozy’s UMP party or not, the current president said one of the most famous quotes of the night: “Berlusconi is berlusconiesque.”

In fact, according to Le Monde, it turns out Berlusconi is UMPesque, as Hollande claimed. His party in Italy, Forza Italia, is part of the European People’s Party. And who was present at the EPP’s meeting in December 2011? Well, both Sarkozy and Berlusconi, of course.

Centre-right Le Figaro was unusually reserved in its analysis of last night’s debate. Sober write-ups of the facts seemed to be their preference, rather than blowing their beloved Sarko’s trumpet.

But they did report the reaction of Hollande’s ex wife, Ségolene Royale, who lost to Sarkozy in 2007: “Francois dominated this debate with force, he was authentic and told the truth.”

Centre-left le Monde on the other hand quoted in full the reaction from far-left Front de Gauche candidate, Jean-Luc Melenchon, who has publically given his support to Hollande.

“We got the feeling that Sarkozy had lost is footing. Hollande was was ready to fight, but Sarkozy just wasn’t.

Rue89 expressed their opinion of who won in one witty headline: “How to break your teeth on a Flamby.”

Flamby was a code name for Hollande during the last round of elections. It’s a soft caramel pudding, and is thought to be a reference to his recent weightloss.

A few took the debate as an opportunity to protest. Factory workers from Aulnay-sur-Bois, just north of Paris, gathered in the rain close to the debate studio to voice their frustration at the closure of their place of work.

Hollande went to speak to the protesters, promising them meeting after the second round “if the French chose me.” Sarkozy preferred to avoid getting wet, and went straight into the studios.

Meanwhile, the coolest of the politically aware had their bespoke playlist for the debate – music magazine Les Inrocks has compiled 10 apt tunes to listen to while the final two had it out.