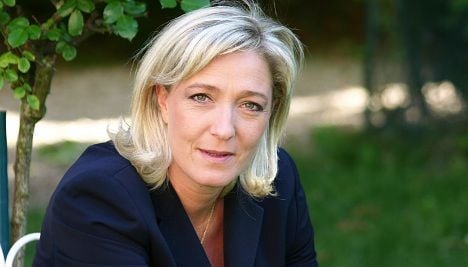 Germany led a chorus of concerns after National Front (FN) leader Marine Le Pen finished third with a surprising 18 percent of the vote in Sunday’s first round.

“This high score is alarming but I expect it will be ironed out in the second round,” said a spokesman for German Chancellor Angela Merkel, adding that she continued to support French President Nicolas Sarkozy in the election.

Le Pen’s strong showing was not enough to take her to the May 6 runoff but it shocked European Union foreign ministers holding talks in Luxembourg the day after the vote.

Danish Foreign Minister Villy Sovndal said the French election result was “extremely worrisome” and followed the rise of the far-right across Europe, including in his own country and Finland.

Swedish counterpart Carl Bildt said: “I’m concerned with the sentiments that we see that are against open societies, against an open Europe, that does worry me, not only in France.”

Luxembourg Foreign Minister Jean Asselborn said Sarkozy was partly to blame for Le Pen’s success after he campaigned for tighter immigration controls and reform of the Schengen passport-free travel area.

“If you repeat every day that we must change Schengen, that we must have a strong immigration policy, that we have to speak about French exception, this is all grist for the FN mill,” said Asselborn, a socialist.

Belgium’s Didier Reynders said far-right gains in France and the rest of Europe “is always a concern” in the continent.

“We must be very watchful about this,” he said.

Extreme right parties have made great electoral strides in several EU nations, from Sweden to Finland and the Netherlands, while others remain strong in Austria, Denmark, Switzerland and Hungary.

Even though Le Pen fell short of the second round, she nearly doubled the 10.4 percent her father Jean-Marie took as her party’s 2007 presidential candidate.

Sarkozy, who finished second with 27.08 percent, will face off with Socialist candidate Francois Hollande in the second round, who led the pack with 28.63 percent.

“Naturally we respect the electoral choice of the French citizens,” Westerwelle said in a written statement.

“But it is good that the run-off now is taking place between two proven democratic candidates who stand for Europe and the German-Franco friendship,” he added.

Le Pen’s strong showing is already shaping the next phase of the campaign with Sarkozy saying far-right voters deserved an answer to their concerns while Hollande blamed the president for the FN’s high score.

The European Commission, the EU’s executive arm, refused to comment directly on the French election but recalled that its president Jose Manuel Barroso and other commissioners have warned against the allure of populism.

Barroso and others “have often urged European leaders to not cede to the temptation of populist speeches and continue to work with us to push for a Europe of peace and growth,” said Olivier Bailly, a Barroso spokesman.

“We must be careful about the populist threat and the spreading of its ideas because they are fundamentally opposed to the ideas of the European project,” Bailly told a news briefing.

“It is clear that the economic crisis has exacerbated social inequalities and in this economic environment, there is a political field for the development of populism.”