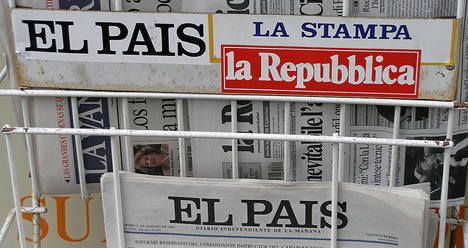 Francois Hollande led the pack with 28.56 percent of the first round vote, while the incumbent managed only 27.07 percent with Le Pen scoring a NationalFront (FN) record of 18.12 percent, according to near-complete interior ministry results.

Italy’s leftist Repubblica warned that it might be too early for Hollande to celebrate, a view echoed by La Stampa, which stressed “it is clear that we will have to wait for the May 6 run-off” to know the winner.

“It’s a stinging defeat for Sarkozy, whose fate in the second round is now in the hands of Marine Le Pen’s electorate,” the Corriere della Sera’s Paris correspondent said.

While the frontrunners’ score matched pollsters’ forecasts, Le Pen surged to a share of the electorate never achieved by her father and former party leader, Jean-Marie Le Pen.

Britain’s centre-left daily The Guardian said Le Pen’s performance was “stunning”, saying she could now emerge as a kingmaker in the second round.

“In the run-up to Sunday’s first round presidential vote, it was hard to find many people in France publicly admitting they intended to vote for Marine Le Pen,” said the daily.

“The surprise score reflected not only how Marine made inroads into the French political landscape during a campaign in which she relentlessly challenged the ‘established’ candidates, but also a deep disillusion with the main parties.”

The right-wing Daily Telegraph echoed the idea of growing disillusionment with the mainstream.

“Famously passionate about politics, the French have followed the campaign assiduously but have been deeply underwhelmed by the main candidates,” it said.

Popular title the Daily Mail carried a picture of first lady Carla Bruni on its front page above the word “humiliated”, although it said her husband could remain in the Elysee depending on where the far-right vote moves.

In Belgium, Le Soir daily argued that even Le Pen’s support might not be enough to save Sarkozy’s seat, claiming that Hollande “already has a foot in the Elysee palace.”

“Even if he lurches further to the right than he did for the first round, it is hard to see how (Sarkozy) could turn things around,” the French-speaking newspaper wrote.

The Danish daily Politiken came to much the same conclusion, arguing that Hollande was endorsed by far-left candidate Jean-Luc Melenchon, who scored 11.7 percent after waging a feisty campaign.

“Francois Hollande can count on the mass of support of the left but the president will have a tough task trying to convince those who voted for Marine Le Pen to back him now,” the paper said.

In Portugal the leading daily Publico headlined “For Hollande the change has already begun.”

It went on: “The first round of the French presidential elections has a double meaning: Sarkozy is the candidate on the way out and Francois Hollande the candidate of all those who want to turn the page.”

The German press said that the strong showing for the likes of Le Pen and Melenchon reflected an angry mood among the electorate.

“The French are frustrated by the state of their country and are angry towards President Nicolas Sarkozy,” said Der Spiegel.

“Marine Le Pen has credibility for the French working class who are suffering, she speaks their language with her tirades against immigrants and the elites,” it said.

The Berlin-based daily Tagesspiegel said that parties outside the mainstream would now have a big influence on the eventual outcome.

“Hollande and Sarkozy are now going to have to try to seduce this reservoir of discontent –these extremists will force their hand,” said the paper.

In its main story on the election, The New York Times said the first round vote had offered “no clear answer about Mr. Sarkozy’s fate or the direction of a European power in an era of debt crisis, low growth and high unemployment.”

It also said Sarkozy could not count on earning all of the first-round votes cast for Marine Le Pen, citing analysts saying the roughly 20 percent of the electorate which backed the FN could abstain.

The Wall Street Journal led off by saying the results had put Sarkozy into a “fight for his political survival,” adding that Le Pen’s “solid performance” suggested that the incumbent had failed to attract far-right voters.

The Washington Post meanwhile said the FN’s strong showing had reflected “the extent of discontent at the increasingly visible presence of Muslim and other immigrants in France’s Christian-rooted society.”