The 33-year-old man, who was originally detained Saturday, has not admitted participating in the killings, said Marie-Suzanne Le Queau, prosecutor in the Évry district on the southern edge of Paris.

After being questioned by police for 48 hours the suspect was indicted for the three more recent killings.

Another judicial examination is under way to consider the first murder which took place in November 2011.

If found guilty he faces life in prison.

Le Queau said police had found in the man’s possession a spent cartridge from the gun used in all four attacks.

“During the course of searches based on information provided by the suspect… were found a motorcycle and a helmet corresponding to descriptions given by several witnesses and a 7.65mm cartridge that an examination has already showed came from the weapon used to commit the murders,” she said.

Forensic tests would be required on two 7.65 calibre guns in the search for the murder weapon, Le Queau added.

She also said the suspect, who is “single and lives alone,” had been convicted of crimes on six previous occasions, including being given an eight-month jail sentence in 2004 for aggravated assault and possession of a weapon.

The shootings, between November 27 and April 5, raised fears of a serial killer stalking the southern Parisian suburbs. France also had to deal with the trauma of a series of deadly shootings in the southern city of Toulouse.

Police had said nothing suggested a political or religious motive for the killings near Paris but that investigators had not ruled anything out.

The suspect’s lawyer, Laurent Servillat, said earlier that he was “calm and cooperative” with police.

He said the suspect had an “extremely complicated and fragile personality” and a “very chaotic history”.

A second suspect was arrested in Paris on Saturday but released Sunday night without charge, a judicial source said.

Hundreds of police had been working in the case, which saw the killings of two men and two women with no known links between them within a 10-kilometre (six-mile) radius in and around the Parisian suburb of Grigny.

All the victims were shot with the same small-calibre semi-automatic 7.65mm weapon.

Police said weapons had been found after they carried out searches of the suspect’s home in another southern Paris suburb, Draveil, and his mother’s home in nearby Ris-Orangis.

But they could not immediately confirm if the gun used in the attack had been found.

The first victim was a 35-year-old laboratory assistant, Nathalie Davids, shot seven times in the car park of her building in Grigny on November 27.

A disabled, unemployed man who said he was her ex-boyfriend, Michel Courtois, turned himself in, was arrested and charged, but later retracted his confession.

On February 22, one of the first victim’s neighbours, 52-year-old Jean-Yves Bonnerue, was shot dead in the same car park.

On March 19, an 81-year-old man, Marcel Brunetto, was killed by a shot to the head in the entrance to a similar block of flats in Ris-Orangis.

And on April 5, a 48-year-old woman, Nadjia Boudjemia-Lahcene, was killed in the entrance to her working-class housing estate in Grigny.

Three years after the fire that nearly destroyed France’s 850-year old landmark – while the cathedral itself is still closed for repairs – the Mayor of Paris has unveiled plans to redesign the surrounding landscape.

The plans show trees and vegetation surrounding the square in front of the cathedral, where, in hot weather, a small stream will flow through to cool the square.

The group envisages a large 400-metre park along the banks of the Seine, while the space behind the cathedral will also be transformed with extra vegetation.

The reception area will also be redesigned. In the future, groups, individual visitors and tourists wishing to access the towers will queue at different locations.

Under the monument, the underground parking lot will transform into a visitor centre, offering an interior walkway that will give access to the archaeological crypt and will open up onto the Seine.

The image can be seen below: 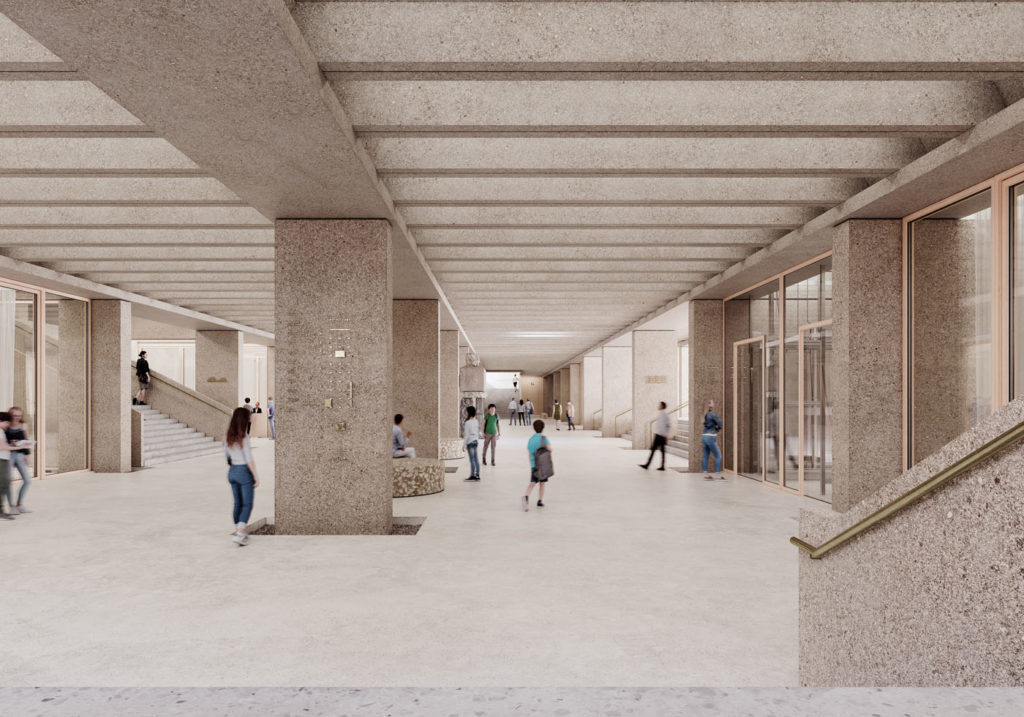 Paris Mayor Anne Hidalgo said the goal was to “magnify” the building, and that there was a “pressing need” to do so after the fire. For the mayor who is known for her efforts to increase green space in Paris, increasing the vegetation around the monument was also a top priority.

“Urban planning and development must now respond to the climate crisis,” said Hidalgo. In total, 131 new trees will be planted.

At a cost of €50 million, the project will be entirely financed by the City of Paris, and it will be headed by the landscape design firm Bas Mets. The group came in first place out of a group of four finalists in a competition that began in the spring of 2021 to determine the best landscape architect for the job.

Work is already ongoing to restore the cathedral itself after the fire, and that is due to be finished in 2024, in time for the Olympics. Once the Olympics and Paralympics are over, work will start on the area around the Cathedral, which is set to be finished by 2027.