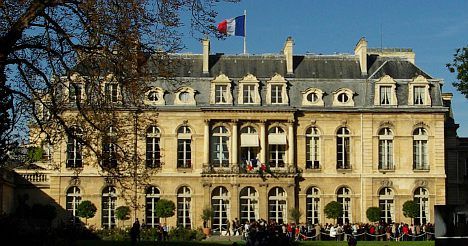 This leaves the presidential chef, Bernard Vaussion, lots of time to wonder whether he will get to cook for a sixth French head of state.

If, as the polls predict, the Socialist François Hollande wins power next month, will he want to bring in a new chef?

“There is always uncertainty. We will see, it will be up to him to decide,” said the 58-year-old, who plans to retire in two years anyhow, as he gave AFP a guided tour of the presidential kitchens.

An enormous cast-iron range dominates the giant room lit by tall windows that look on to the Elysée courtyard.

The workforce here is 100 percent male, an unwritten rule instigated by Bernadette Chirac, the wife of Sarkozy’s predecessor, Jacques Chirac.

She feared that a feminine presence in the kitchens might “disturb” the team, said Vaussion, adding that he regularly takes on women for work experience but has never hired one.

The right-wing president personally approves the menu every morning, as his predecessors François Mitterrand and Valéry Giscard d’Estaing did before him.

“He writes ‘yes’ in the margin next to the dishes I propose,” said the cook, who happily notes that the incumbent has a healthy appetite.

But Sarkozy is also health conscious, preferring “light, balanced meals and poultry to red meat”, in a clear break with his predecessors who were not afraid of rich fare, even at lunchtime.

Sarkozy also did away with cheese after meals, he noted.

The only president who called on the services of a nutritionist was the Socialist Mitterrand but that was only “when he was sick”, said Vaussion, who arrived in the Elysée in January 1974 as a commis chef after finishing a seven-year apprenticeship.

“Chirac loved casseroles and he loved lamb in all its forms: leg of lamb, saddle of lamb, shoulder of lamb. Mitterrand adored seared foie gras, but I also used to roast it for him,” he recalled with emotion.

Vaussion may have spent nearly four decades in the loyal service of the French head of state, but he says he is still awed by the prestigious guests who turn up at the Elysée palace.

“We get high society here, people who often frequent the best restaurants. We have to watch our every step,” he said, noting that if a restaurant gets it wrong, the client won’t come back.

“Here it’s the opposite. It’s us who leave,” he joked.