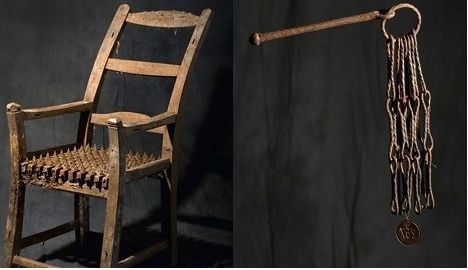 The macabre collection of over 350 items was built up by Fernand Meyssonnier, one of France’s last executioners.

He worked between 1947 and 1961 and executed more than 200 people. Meyssonnier, who died in 2008, was particularly known for the executions he carried out in Algeria.

The collection, planned to take place on Tuesday, was put up for sale by his only daughter and was to be handled by the Cornette de Saint Cyr auction house.

On Tuesday morning the sale was still listed on the auction house’s website as “Penalties and Punishments of Yesteryear”.

Gruesome items up for sale included thumb screws, a hand-crusher and a guillotine.

Other torture instruments included a “pear of anguish”, also known as a “choke pear” as the pear-shaped instrument was inserted into the victim’s mouth and then slowly expanded during questioning.

A number of organisations including Amnesty International protested against the sale.

They were joined last week by culture minister Frédéric Mitterrand who said the sale was more about “morbidity and barbarity” than “culture” and asked for it to be cancelled.

The auction house said it had cancelled the sale amid a “vindictive” climate.

It said it would not rule out rescheduling the sale for a later date, depending on the wishes of Meyssonnier’s daughter.