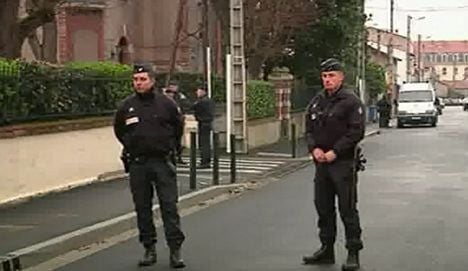 Claude Guéant told RTL there had been no contact with Mohamed Merah since 10.45pm on Wednesday evening.

Merah had initially told police he would give himself up, but then changed his mind.

“We need to end this,” said Guéant. “He needs to give himself up.”

When asked if an assault on the apartment where Merah is holed up was likely, Guéant said “all hypotheses are possible but our priority is to capture him alive.”

The sound of blasts and gunshots were heard overnight near the flat in Toulouse, southern France, where the gunman was holed up for a second day.

One source said anti-terrorist officers besieging the apartment had exploded a series of charges before and after midnight to intimidate the 23-year-old suspect, who has claimed responsibility for the seven murders.

Prosecutors said Mohamed Merah, a Frenchman of Algerian descent, had fought off several police assaults on the flat on Wednesday and bragged to negotiators of having been trained by Al-Qaeda on the Afghanistan-Pakistan border.

“He expressed no regret apart from not having had enough time to kill more victims and even boasted of having brought France to its knees,” France’s top anti-terror prosecutor Francois Molins told reporters.

The drama began in pre-dawn raids on Wednesday, and the French authorities are convinced that they have surrounded the right man and that he has no hostages with him.

While there were no obvious signs of an imminent police assault on the gunman early on Thursday, a source close to the enquiry said that the final denouement was not far off.

A police source played down talk of an assault on the flat.

“He said he wanted to give himself up. He changed his mind, so we’re stepping up on the pressure on him to surrender,” he said.

There was no indication of an exchange of fire following the blasts. Merah is thought to be armed with a Kalashnikov assault rifle, a Mini-Uzi submachine pistol and a collection of handguns.

Molins said Merah had claimed responsibility for three shootings over the previous 10 days in which three French paratroopers, three Jewish children and a teacher were killed in cold blood, shocking the nation.

He claimed to be avenging Palestinian deaths and opposing the French military’s involvement in Afghanistan and France’s ban on full-face veils.

Molins said the suspect had shot and wounded two elite officers after police first raided the Toulouse apartment building before dawn on Wednesday.

“Mohamed Merah explained that he belonged to Al-Qaeda. He explained he had been trained by Al-Qaeda in the Pakistani-Afghanistan region in Waziristan,” Molins told reporters in Toulouse, scene of two of the shootings.

Waziristan is a tribal area straddling the Afghan-Pakistani border which is known as a haven for Islamist insurgents — including Al-Qaeda militants — connected to Taliban guerrillas fighting in both countries.

Molins said the suspect had gone to the region twice and on one occasion had been arrested by Afghan police and handed over to US army troops, who put him on a flight back to France.

“He said he does not have a suicidal spirit, he did not have a martyr’s soul, he preferred to kill and remain alive,” said Molins, adding that the killer had claimed to have always acted alone.

“He explained how… he had even been suggested to carry out a suicide mission and refused, but agreed to carry out a general mission to commit an attack in France,” Gueant told TF1 television.

Police and prosecutors said they had arrested Merah’s mother, brother and his brother’s girlfriend as part of the inquiry. Sources said the suspect had been known to the domestic security service for some years.

After the failed police assault on the first floor flat in Toulouse where Merah was living, the two sides settled down to an armed siege. During the day on Wednesday other residents were evacuated from the building.

President Nicolas Sarkozy, who is running for re-election in an April-May vote, told religious representatives at a meeting in a police station near the siege site that the gunman had planned to carry out another attack on Wednesday.

Molins told reporters that Merah had chosen two Toulouse policemen to target for future assassination and planned to kill another soldier.

Guéant said the suspect had thrown out a .45 pistol used in the seven murders.

“In France you do not get sent to prison for professing strange or extremist ideas,” Guéant told AFP.

The siege came as the Jewish victims of the attacks were being buried in Jerusalem and two of the soldiers were being laid to rest, one in France and one in Morocco.

The shootings began on March 11th, when a paratrooper of North African origin arranged to meet a man in Toulouse to sell him a scooter.

Four days later three more paratroopers from another regiment were gunned down, two of them fatally, in the same fashion in a street in the nearby garrison town of Montauban.

Then on Monday the shooter, again wearing a motorcycle helmet and riding a scooter, attacked the Ozar Hatorah Jewish school in Toulouse, killing a religious studies teacher, his toddler sons and a seven-year-old girl.

Sarkozy and several rival candidates for the presidency attended a memorial ceremony for the slain soldiers at their barracks in Montauban.

Sarkozy returned to Paris, where his office said US President Barack Obama had called to offer condolences, adding: “France and the United States are more determined than ever to fight together against terrorist barbarism.”