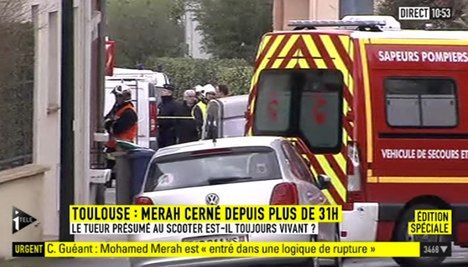 As President Nicolas Sarkozy called for national unity, some of the candidates seeking to replace him in next month’s vote began to manoeuvre to take advantage of the mood of crisis generated by the gunman’s attacks.

The gunman, said to be a young Frenchman of Algerian descent, is sought for the murders of three Jewish children, a teacher and three soldiers.

Far-right leader Marine Le Pen – running in third place in the polls – was first off the blocks, claiming: “The danger of fundamentalism has been underestimated in our country.”

Brushing off protests from a television interviewer that she was seeking to manipulate a national tragedy for her own ends, Le Pen insisted she had warned of the dangers of extremist violence before the killings.

“Politico-religious groups are developing in a lax climate,” she said.

“We need to fight this war against politico-religious fundamentalist groups which are killing Christian children, young Christian men, young Muslim men and, two days ago, Jewish children,” she added.

A spokesman for far-left challenger Jean-Luc Melenchon did not mince his words in response, denouncing Le Pen’s National Front as “vultures” feeding at the scene of the crimes.

“Throughout this campaign, yesterday as today, Marine Le Pen has had the same goal — to feed a Crusader spirit inspired by religious war under the theory of a clash of civilisations,” alleged Alexis Corbiere.

Centre-right candidate Francois Bayrou also accused the “extreme right” of trying to “surf” to power on the back of the violence.

The tensions running through French society were thrown into stark relief on Wednesday by the spectacle of four of the candidates for the April 22 first round vote thrown together on a single plane.

Hollande, forecast to beat Sarkozy in the second round run-off on May 6 by polls taken before the attacks, sat in the first row, Le Pen in row five, Joly in row six and Dupont-Aignan near the mid-section.

It was not clear if the candidates planned to speak during the journey, but the events have thrown predictions for their campaign into chaos.

If the situation is dealt with quickly, Sarkozy may win credit for being the man in charge when the killer was caught just two days after his third attack – unless voters ask why the militant was not under closer watch.

Opinion pollsters said all surveys taken before the crisis had suggested that voters care more about jobs and household spending power – and trusted Hollande more than Sarkozy on these issues.

If the national debate switches to security and immigration as a result of the killings, this could benefit Sarkozy, as he is judged more credible on this topic by most voters, analysts told AFP.

Nevertheless, Gael Sliman of BVA-Opinions told AFP: “If the suspect gives himself up this afternoon then the election campaign could resume its normal course within the next few days.”

For at least five months Hollande has enjoyed a clear lead over the right-wing incumbent in opinion polls, at least in second-round voting intentions, but Sarkozy has begun to make up ground.