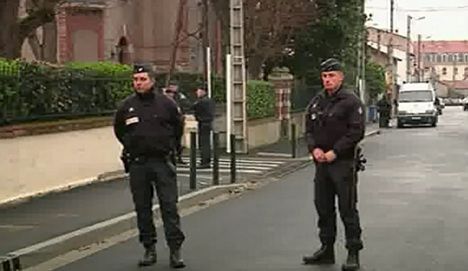 Residents of the small five-storey building had stayed inside their flats under police orders after the operation to capture the suspected shooter was launched overnight. Police said they would be handed over to psychiatric counsellors.

A blast rang out earlier on Wednesday as French police besieged the flat.

Two officers had already been wounded as shots rang out in the ongoing operation to arrest the suspect, thought to be a French national of North African origin who told officers he was a member of the Al-Qaeda network.

Armed officers investigating three recent attacks in which a scooter-riding killer gunned down seven people, including three Jewish children, sealed off an address in a residential district of the southern city of Toulouse.

Bursts of gunfire rang out periodically, AFP reporters at the scene said.

Interior Minister Claude Guéant said the suspect’s brother had been detained, although he confirmed that only one suspect had been at the scenes of the three shooting attacks carried out since March 11th.

The suspect had previously been arrested on a matter of common law in the southern Afghan city of Kandahar, cradle of the Taliban, police said.

The victims of the attacks were three soldiers of North African origin, three Jewish children and a rabbi. The police raid came on the day that the Jewish victims were due to be buried in Jerusalem.

Guéant said the 24-year-old suspect had spoken to officers through the door of his apartment, and declared himself to be a “mujaheedeen” or Islamic warrior fighting to avenge Palestinian children killed in the conflict with Israel.

Guéant confirmed two officers had been lightly wounded in the raid, during which the suspect had shot through a door. He said later that he hoped to capture the suspect “alive and in a condition where he could face justice.”

“The suspect’s mother was brought to the scene. She was asked to make contact with her son, to reason with him, but she did not want to, saying she had little influence on him,” Guéant said.

“This person has made trips to Afghanistan and Pakistan in the past … and says he belongs to Al-Qaeda and says he wanted to avenge Palestinian children and to attack the French army,” he added.

“He has links with people involved in Jihadism and Salafism,” he added, referring to two strains of Muslim thought that have influenced Al-Qaeda.

Neighbours leaving the cordoned area said the suspect was on the first storey of the building in the leafy residential area. They said the first shots had rung out around 3am (0200 GMT).

Paris Grand Mosque Recter Dalil Boubakeur urged France not to stigmatise its Muslim citizens in the wake of the shootings, saying “99.9 percent” of Muslims here were law-abiding citizens and the killings were the work of a tiny “fringe”.

If the suspect is proved to have been responsible for the killings, it would bring to an end one of the most intense manhunts in French history and help calm tensions after the series of attacks disrupted a presidential election.

The shootings began on March 11th, when a paratrooper of North African origin arranged to meet a man in Toulouse to sell him a scooter which he had advertised online, revealing in the ad his military status.

A message sent from the suspect’s brother’s IP address was used to set up an appointment to inspect the bike, an appointment at which paratrooper Imad Ibn Ziaten was subsequently killed, a police source said.

Ibn Ziaten, a 30-year-old staff sergeant in the 1st Airborne Transportation Regiment,  was shot in the head at close range with a .45 calibre pistol, a method that was to become the suspect’s signature.

Four days later three more paratroopers from another regiment were gunned down — two of them fatally — in the same fashion in a street in the nearby garrison town of Montauban.

Arab soldiers are prized targets for groups like Al-Qaeda, which regards Muslims who fight for Western armies as traitors.

Then on Monday the shooter, still wearing a motorcycle helmet and riding a scooter, attacked the Ozar Hatorah Jewish school in Toulouse, killing a religious studies teacher, his toddler sons and a seven-year-old girl.

Anti-terrorist magistrates said the same gun and and make of scooter was used in all three attacks and noted that the three attacks were carried out at precise four-day intervals.

On Wednesday, the bodies of the four Jewish victims arrived in Israel.

Rabbi Jonathan Sandler, his sons Arieh, 5, and Gabriel, 4, and seven-year-old Miriam Monsonego arrived at Ben Gurion international airport near Tel Aviv shortly before dawn. They were to be buried later in the day.

President Nicolas Sarkozy and his Socialist rival for the presidency François Hollande were due to attend a memorial ceremony for the slain soldiers in Montauban later Wednesday.

Ibn Ziaten was to be buried in Morocco, while his dead comrades were due for burial in France on Wednesday and Thursday.

Both Sarkozy and Hollande temporarily suspended their campaigns following Monday’s attack, with France was traumatised by an unprecedented series of hate crimes.

TRANSPORT
It’s not in the Alps: What you need to know about France’s newest and longest cable car
Url copied to clipboard!