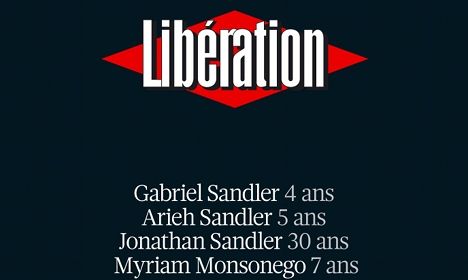 The newspaper’s cover included a list of the victims of the tragedy on Monday morning, as well as the three soldiers killed on March 11th and 15th, now believed to have been killed by the same man.

In its editorial, the newspaper said it was “dangerous to prejudge the motives of the killer.”

“What link can we make between an anti-semitic crime in front of a Jewish school and the murder of French soldiers, of whom two were Muslim,” it said.

Moving testimonies from eyewitnesses were included in most of the coverage.

Many also reported that the murderer was seen wearing a small camera around his neck.

“Did he film himself?” asked France’s biggest circulation newspaper, Ouest-France.

Many TV news channels and newspapers also speculated on the profile of the killer, interviewing criminal psychologists.

Daily newspaper Le Figaro quoted psychiatrist Roland Coutanceau, who said the killer was likely to be either “mentally ill with a paranoid character” or “part of a terrorist organisation.”

Tributes were paid to the teacher who was killed with his two sons, Jonathan Sandler.

BFM TV reported that Sandler was a “warm man, dedicated to the teaching of his religion.”

A report of a march in his honour in Bordeaux, where he was born, included tributes from church elders who knew him.

Sandler left a wife and a young daughter of 18 months.

An increase in the security level in the south west of the country also received wide coverage.

TV channel TF1 reported that the “scarlet” level is the highest of four security states that can be declared.

This is the first time the “scarlet” level has been applied since the creation of France’s system of terror alerts, known as Vigipirate.

With just 33 days to go until voting begins in the French presidential election, all candidates suspended the campaign, at least until Wednesday.

Both President Nicolas Sarkozy and Socialist candidate François Hollande went to Toulouse to visit the school.

The campaign is not the only thing to be put on hold.

Regional newspaper La Dépêche reported on Tuesday that the carnival in Toulouse, planned for this Wednesday, has been cancelled.

The carnival was due to be the first since 1988 and thousands of participants have been preparing for several months.

“In a context of mourning, this decision seemed to go without saying,” said a carnival spokesman, Laurent Vildary.

Asked whether a new date has been fixed, Vildary said “we are still in shock over this drama. When the time comes, we will take the decision.”