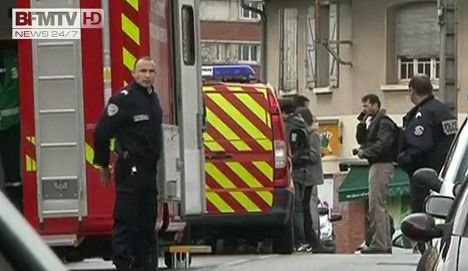 The children, aged three, six and 10, and a 30-year-old religious education teacher were mowed down as they arrived for class at the Ozar Hatorah school in the southwestern city of Toulouse, officials said.

Israel said it was “horrified” by the attack and a European rabbis’ group denounced it as an “act of barbarity.”

The gunman shot a man outside the school before one of his weapons jammed and he then entered the school grounds where he sprayed the area with bullets, a local prosecutor said.

“He shot at everything he could see, children and adults, and some children were chased into the school,” prosecutor Michel Valet told reporters, adding that the school has around 200 pupils.

Parents of children at the school said a teacher and his two children were among the dead.

The prosecutor said that one person was seriously wounded in the attack, which came just days after two previous shootings in the region by a man on a motorbike who killed three soldiers.

There was no hard evidence of a link between the shootings, but Interior Minister Claude Guéant told AFP that there were “similarities” and police said the same calibre weapon was used in all three attacks.

The gunman initially used a 9-mm weapon but it jammed, so he switched to a .45-calibre gun as he went into the school, police said. A .45-calibre weapon was used in last week’s deadly shootings.

Guéant ordered security to be tightened around all Jewish schools in France after the Toulouse attack and said he was heading for the city where he was due to be joined by President Nicolas Sarkozy.

Sarkozy said it was “much too early” to link Monday’s shootings with the killings last week.

“We are horrified by this attack and we trust the French authorities to shed full light on this tragedy and bring the perpetrators of these murders to justice,” Israeli foreign ministry spokesman Yigal Palmor told AFP.

Police in southwestern France launched a major manhunt last week after the killing of three paratroopers and the wounding of another in two separate, but connected incidents.

The perpetrator of both attacks fled on a motorbike.

Foreign Minister Alain Juppé said there was as yet no evidence to suggest the soldiers had been killed because of their service in Afghanistan.

Between 50 and 60 police officers, including anti-terrorist specialists, have been drafted in to the investigation.

Senior military officials have ordered troops based in the region not to wear their uniforms outside barracks.

The first victim, a 30-year-old non-commissioned officer, was dressed in civilian clothes when he was shot dead in the street at point blank range on March 11th.

The gunman escaped on a powerful motorbike or scooter.

On Thursday three more paratroopers, based this time in Montauban, 46 kilometres (28 miles) away, were shot while standing at a cash machine outside their barracks.

Two of Thursday’s victims — sappers from 17th Parachute Engineering Regiment (RGP) aged 26 and 24 — died on the spot. The third man, a 28-year-old from the same regiment was left in a critical condition with spinal injuries.

Witnesses saw a black-clad motorcyclist walk up to the men, who were in uniform but unarmed, and open fire at point blank range.

Witnesses described how the killer had time to turn over one of the wounded men who was trying to crawl away and fire three more shots into him before getting back on his scooter and making his escape.

The increased security measures apply to a whole swathe of the southwest, including Toulouse, Montauban, Pamiers and Tarbes, towns and cities that are home to most of France’s elite airborne units.