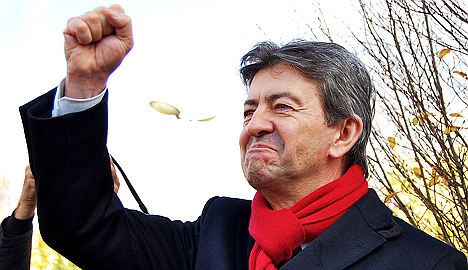 Mélenchon of the Front de Gauche (Left Front), who represents a coalition of leftist parties including the Communists, has emerged as a significant factor in the campaign just as Socialist frontrunner François Hollande faces a resurgent threat from incumbent President Nicolas Sarkozy.

His virulent attacks on the rich, France’s elite and austerity measures have struck a chord with many voters, and polls this week showed him rising above the symbolic 10 percent mark, up four points from the start of the year, with only five weeks to go before the April 22nd first round of voting.

Decrying a France “disfigured by inequality,” Mélenchon called for a “civic insurrection” as he addressed a sea of supporters in Place de la Bastille.

Waving red Front de Gauche and Communist Party flags, tens of thousands of supporters marched through central Paris under cloudy skies in a symbolic rally to “retake the Bastille” — the square where the mediaeval fortress and prison was stormed in the watershed event of the French Revolution.

Organisers said more than 100,000 people took part in the rally, held on the anniversary of the Paris Commune uprising of 1871.

“We have returned, the people of France’s revolutions and rebellions. We are the red flag!” Mélenchon roared to the crowd, saying the rally marked the start of a “citizens’ revolution.”

In a 20-minute speech, Mélenchon outlined a programme focused on taxing the rich and financial world, boosting social spending and increasing workers’ rights.

He also vowed constitutional changes enshrining the rights to abortion, to homosexual marriage and a “green rule” forcing France to protect the environment.

To chants of his name, Mélenchon vowed to “open a new chapter” in France’s history and offered support to the peoples of Greece, Spain, Portugal and Italy, who he said were “under the weight of oppression” from European austerity measures.

“We must today, in this France that has been disfigured by inequality … refound the republic, refound France itself,” he said, before his speech ended with the singing of left-wing anthem “The Internationale” and the French national anthem.

“Mélenchon represents the only political force that truly represents the French people,” supporter Sylvianne Tardieu, a 50-year-old Communist from the central city of Clermont-Ferrand, said at the rally.

“He is fighting against the world of finance for the French people,” she said.

Organisers hailed the rally, where marchers carried placards reading “Take Power!” and “The Citizens’ Revolution Is on the March,” as a major step forward in Mélenchon’s campaign.

“This is a big success, it’s the biggest public gathering of the election campaign so far,” Mélenchon advisor Eric Coquerel told BFM television.

“We can go much higher,” he said of Mélenchon’s poll numbers. “Our campaign is gaining credibility. … We are targeting the second round.”

The latest IFOP poll released Sunday showed Mélenchon with 11 percent support in the first round.

It also showed right-wing Sarkozy, who this week for the first time moved ahead of Hollande in first-round intentions, with 27.5 percent of the vote compared to 27 percent for his Socialist rival.

Hollande, the longstanding poll-leader, was still forecast to comfortably win the May 6th second round with 54 percent to 46 percent for Sarkozy.

Sensing the threat on his left flank, Hollande has suggested to left-wing voters that a vote for Mélenchon could hand victory to the right.

“Every vote is useful,” Hollande said when asked about Mélenchon’s surge this week. “I do not want to question this or that choice by voters, but everyone must understand what is at stake.”

But Mélenchon’s supporters rejected the idea that voting for the candidate could lead to a victory for Sarkozy.

“We are pushing ideas for change,” Sebastien Goyard, a 27-year-old social security worker from Paris, said during the march.

“If we don’t vote with our principles in the first round, change is not possible,” he said.

Mélenchon, a 60-year-old former Socialist minister and senator, split with the party in 2008 to found his own party and was elected to the European Parliament in 2009.