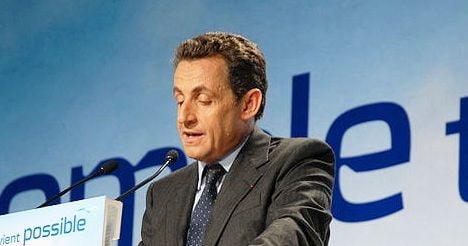 Defending a re-election campaign promise to cut the number of new arrivals in half, Sarkozy bluntly declared that France’s attempts to integrate foreign arrivals into its culture and society had become paralysed.

“Our system of integration is working more and more badly, because we have too many foreigners on our territory and we can no longer manage to find them accommodation, a job, a school,” Sarkozy said.

Sarkozy has been accused of tacking to the right in the run up to the April 22 first round of the French presidential election in order to recruit voters tempted by anti-immigrant candidate Marine Le Pen’s platform.

But, in a television interview, he insisted that while immigration could remain “a boon” for France in many areas, it must be controlled more tightly through tougher residency qualifications for newcomers.

“Over the five-year term I think that to restart the process of integration in good conditions, we must divide by two the number of people we welcome, that’s to say to pass from 180,000 per year to 100,000,” he said.

Sarkozy also announced new plans to limit some welfare benefit payments currently available to immigrant workers to those who have enjoyed residency for ten years and have worked for five of those.

The hardening of his tone came after a week in which the issue of Muslim immigration and in particular Islamic and Jewish dietary practice has surged to the fore in the national debate, upsetting religious leaders.

Jews and Muslims came together Tuesday to complain they were being used as pawns in the election, after first Le Pen then Sarkozy and finally his prime minister Francois Fillon criticised the production of halal and kosher meat.

“France’s problems are so major, as we are in a period of crisis, so how can the issue of kosher meat and halal meat be a major problem for France?” asked an exasperated Grand Rabbi of France, Gilles Bernheim.

For its part, the French Council of the Muslim Faith slammed what it said was the use of Muslims as “scapegoats” in the election campaign in which halal slaughter of animals has become a hot-button issue.

The unusually strong reactions from the communities came a day after Fillon urged Muslims and Jews to consider scrapping “outdated” slaughter rules.

Le Pen launched the halal debate last month when she claimed all meat from Paris region abattoirs was prepared using Islamic halal traditions and that non-Muslim consumers in the capital were being misled.

Like kosher slaughter, the halal method requires the abattoir to kill the beast by slitting its throat. Stunning the beast first – as is done in non-ritual abattoirs – to lessen its ordeal is not permitted.

It later emerged that Paris region abattoirs mostly supplied local Muslim butchers and that most meat sold in Paris came from outside the region.

But the issue stuck and on Saturday Sarkozy suggested meat should be labelled to tell consumers how the animal was slaughtered.

France is home to western Europe’s largest Muslim minority, officially estimated at least four million, and its largest Jewish community, estimated at up to 700,000.

The country has for years been debating how far it is willing to go to accommodate Islam, now its second religion, and Sarkozy and Le Pen have both made the matter a central issue in their campaigns.

Francois Hollande, the Socialist candidate and frontrunner in opinion polls, said his rivals had now gone too far and called for “restraint”.

France will vote in the first round of a presidential election on April 22, followed by a second-round run-off on May 6. All recent opinion polls forecast that Hollande will emerge victorious.