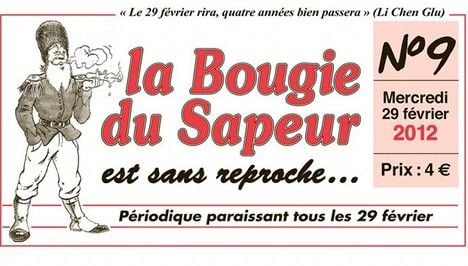 Since it was founded in 1980, “La Bougie du Sapeur” is published only on February 29th in each leap year.

Its name means “The Candle of the Sapper” and refers to a cartoon character created in the 1890s, Sapper Camember, who was born on February 29th.

Wednesday’s issue is the ninth in the series of the newspaper which describes itself as “funny but not naughty” (“drôle mais pas méchant”).

The latest issue contains a front page editorial dealing with one of the anomalies of French life, the measure of beer known as a “demi”.

While a “demi” literally means “half”, a request for a “demi” in a bar produces a quarter litre of beer.

“It’s a veritable scandal,” says the newspaper. “When you ask for a demi in your local, you get a quarter. It’s organised theft. We are starting a crusade to return the demi to being: a demi!”

Little has changed since the newspaper was founded although current editor Jean d’Indy added photos in the 1992 issue (number 4).

Readers may be frustrated by some of the newspaper’s quirks.

Answers to the crossword puzzle are given in the next issue, meaning a wait until February 29th 2016.

The editor said he had been asked to create a similar newspaper to appear every April 1st, but he declined.

“Things that are rare have a great value in the hearts of people,” he told radio station Europe 1.

Profits from the newspaper are donated to an autism charity.