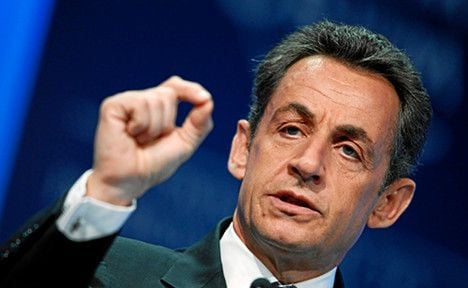 François Hollande “lies from morning to night,” Sarkozy told cheering supporters in the Alpine town of Annecy, the day after officially declaring his candidacy for the presidential election in 10 weeks.

“When you tell the English press that you are pro-market (economically liberal) and when you come to explain to the French that finance is the enemy, you are lying, you are lying from morning to night,” he said.

The president was referring to an interview in The Guardian published on Monday in which the Socialist favourite said he wanted to reassure the City of London that it need not worry about his plans to regulate the financial world.

Hollande said in his first campaign rally late last month that the “enemy” was “the world of finance.”

Late Thursday on French television Hollande reacted by accusing Sarkozy of launching “attacks that make no sense when they are full of falsehoods, caricature, manipulation.”

Polls consistently show Hollande as the clear frontrunner and, with the first round of voting on April 22nd, the election is shaping up to be a classic two-horse race between right and left.

Sarkozy came out in fighting form in his Annecy rally, praising his achievements in his five years in office and vowing to carry on reforming.

“In five years, France has changed a lot,” thanks to his government’s actions, the 57-year-old said.

Many analysts say the right-winger failed to deliver on many of his reform promises but Sarkozy produced a long list that he said showed his mandate had been a success.

These included an overhaul of universities, lowering retirement age from 62 to 60, limiting the impact of public sector strikes, and moves to dismantle the 35-hour working week.

Sarkozy set the stage for his re-election campaign last week with a newspaper interview that laid out a conservative social agenda that includes opposition to gay marriage and euthanasia and plans to restrict immigration.

He returned to right-wing themes on Thursday in Annecy, and reiterated his promise to hold a referendum on restricting the right to unemployment benefits.

The French leader’s campaign website, emblazoned with the slogan “A strong France”, went online on Thursday as he took to the campaign trail with a visit to a cheese-making plant in the Alps before the rally.

Sarkozy said on Wednesday he felt it was his duty to stand and see France through its worst crisis since World War II.

Far-right champion Marine Le Pen, who inherited the anti-immigrant National Front from her father Jean-Marie Le Pen last year, may have an outside chance of knocking out Sarkozy to snatch a slot in the second-round run-off.

But she is still a little way behind him in opinion polls and is struggling to raise the 500 signatures she needs from mayors and regional councillors to make her candidacy official, with a month to go to the filing deadline.

The latest poll conducted just before Wednesday’s declaration forecast that Hollande would beat Sarkozy in the May 6th run-off by 57 percent to 43.

Having come to office vowing to boost employment and household spending power through economic liberalisation, Sarkozy is running for re-election with joblessness hovering near 10 percent and amid an EU debt crisis.

With Hollande attacking his austerity programme and mocking his promises, Sarkozy’s new pitch is to cast himself as the tough realist steering the French ship through rough waters while Hollande dreams of times gone by.

Shortly after his declaration, right-wing lawmakers approved a plan to raise the sales tax in order to fund a cut in employer social contributions, a measure that Hollande has slammed and vowed to reverse.

Arguing that France faces a crisis “unknown since World War II”, Sarkozy attacked Hollande’s programme, which promises big increases in state spending and the creation of thousands of teaching jobs.