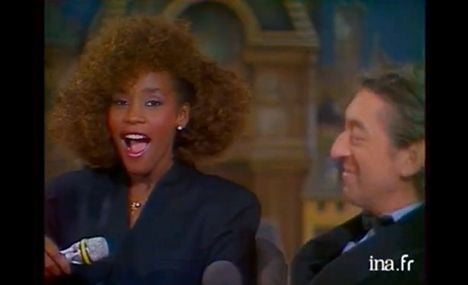 The year was 1986, soon after the 22-year old Whitney Houston had been discovered, and she was appearing on the popular variety show Champs-Elysées.

Gainsbourg kissed her hand and told her, as she sat down next to him, “you are superb.”

Drucker repeated the compliment, adding that Gainsbourg said she is very pretty.

A slurring Gainsbourg then leaned towards Drucker and said “no, you are not Reagan, I am not Gorbachev, so don’t try.”

He then said in English, to Houston’s astonishment, “I said, I want to fuck her.”

The audience gradually started gasping as they understood what he said while Houston herself was open-mouthed.

“What did you say?” she said to him while the show’s host hurriedly tried to explain away the comment by saying Gainsbourg had wanted to offer her flowers.

“Not at all,” said Gainsbourg, before adding, this time in French, “I said I wanted to fuck her.”

“Yeah I know,” said Houston, who seemed happy to laugh off the unwanted approach.

Drucker then offered him a cigarette to help him calm down. “I don’t think Whitney Houston is going to come back on Champs-Elysées” he added.

Michel Drucker told Gala magazine on Sunday that the show was the moment most French people first encountered Whitney Houston.

He also revealed that while Houston was professional and appeared to laugh off the encounter on TV, she found it unpleasant and was irritated.

“Sacha Distel asked me to have her on because she was the cousin of one of his friends, Dionne Warwick,” he said.

“That was without counting on Serge, who put me in a terrible situation. Whitney was furious. That night I even went to her hotel with flowers to apologise.”

“That wasn’t enough though. Shortly afterwards, she told Variety magazine that she didn’t know such a programme could exist. A programme where artists can be so deceived.”

Later, when they met again, it was clear that Houston was happy to laugh off the encounter.

“I saw her some years later in Monaco during an awards ceremony I was presenting with Claudia Schiffer,” he said.

“We were seated next to each other at Prince Albert’s table. I thought it was going to be awful but we ended up laughing about it. She had found out more about this famous Serge Gainsbourg in the meantime.”