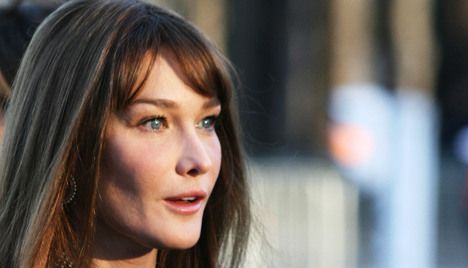 The statue is designed to be a tribute to the mostly Italian women who worked in a feather factory in the town. Bruni-Sarkozy herself is Italian-born.

Not everyone in the town seems impressed by the loyal mayor’s artistic venture.

“It’s sad for the women who did this work,” said William Geib of the opposition Socialists. “Carla Bruni must have seen more feathers on ostriches and in fashion shows than in factories.”

Other politicians in the town of 30,000 people also reacted angrily to the news.

“This small detail has not been specified when we had budget discussions,” said one.

“Does she really deserve a statue?” said Jean and Bernadette. “First ladies come and go and this one might not be around for too much longer!”

Speaking on radio station Europe 1 on Monday morning, the mayor claimed the statue “isn’t a statue of Carla Bruni” but a statue “symbolizing the Italian woman.”

“Together with the sculptor, we thought how good it would be to get the agreement of the Italian-born First Lady of France to have a more up-to-date representation.”

“The statue will not have the name of Carla Bruni,” he said. “We never even imagined that the First Lady might come to any inauguration we might have.”

44-year-old Bruni-Sarkozy married the president in February 2008 after meeting him just three months earlier at a dinner party.

She is well known as a singer and former model. She has also acted and recently appeared as a tour guide in Woody Allen’s “Midnight in Paris”.

Bruni-Sarkozy gave birth to the couple’s first child, a daughter, in October 2011. The child is her second and her husband’s fourth.