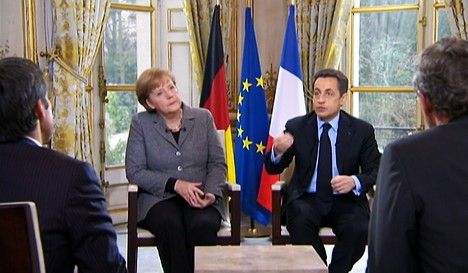 Despite accusations in both countries of interference, Merkel used a visit to Paris for a joint Franco-German cabinet session to make clear her support for Sarkozy, who has increasingly cited Germany as a model for France.

“We belong to the same political family. He supported me and it is natural that I support him in his campaign,” Merkel said during a joint television interview with Sarkozy to be broadcast later on French and German television.

Saying the two had worked together in a “friendly atmosphere” on the eurozone debt crisis, Merkel said they had a strong personal relationship.

Sarkozy said he was pleased to have won her support.

“The French people will decide themselves, like Germans decide, freely,” he said in the interview, but added: “When someone for whom you have affection and whom you admire says ‘I support your actions’, that pleases me.”

At a press conference after the cabinet session, Merkel dismissed criticism of her support for Sarkozy, saying: “It is normal that we support parties that are friends.”

Merkel recalled that Sarkozy had supported her in 2009 during her own election campaign, and said the French leader’s Socialist opponent François Hollande had recently come to Germany to address the opposition SPD.

Sarkozy thanked Merkel for her “friendship and trust” and — without citing him by name — slammed Hollande’s plan to renegotiate a eurozone fiscal compact seen by Berlin and Paris as a solution to the eurozone debt crisis.

He also denounced critics, in particular from the left, who have slammed Sarkozy for taking inspiration from the German model in efforts to reform France’s faltering economy.

“We are not jealous of them (Germany), we want to draw inspiration from them,” Sarkozy said, warning his opponents against “playing with feelings that remind us of periods that we do not want to see again.”

France and Germany were once seen as the twin motors of the European Union, but Paris is now clearly the junior partner, its economy lagging behind by any measure, and Sarkozy has turned to Berlin for ideas.

Sarkozy trails Hollande in opinion polls and Merkel fears that a new left-wing French administration will diverge from her austerity plans.

Speaking to reporters in Dijon, Hollande said “it says a lot about (Sarkozy’s) situation” that he was seeking Merkel’s support.

“For me the only test is the French people…. I don’t need the support of anyone but the votes of the French people,” he said, adding that Merkel would face a “tough task” in winning support for Sarkozy.

Sarkozy, still smarting from France’s loss of its AAA debt rating, cites Germany’s success almost daily to justify his own policies, drawing inspiration from both Merkel and her centre-left predecessor Gerhard Schroeder.

In Berlin, Merkel’s spokesman Georg Streiter said her active support for Sarkozy’s re-election campaign was a “personal” engagement as leader of Germany’s centre-right CDU party and not as the nation’s chancellor.

According to CDU general secretary Hermann Groehe, Merkel plans to support Sarkozy at campaign rallies ahead of France’s two-round presidential election, with a first round on April 22nd and a run-off on May 6th.

Sabine von Oppeln, a Berlin-based expert on Franco-German relations, said Merkel’s backing of Sarkozy was motivated by her efforts to reform Europe.

“With the euro crisis, she found in Sarkozy a partner who has largely supported her or at least not worked against her,” she said.

“There were numerous tensions between Merkel and Sarkozy in the past but today she is making a tactical calculation based on the fact that the two governments need Europe.”

German newspaper Süddeutsche Zeitung meanwhile wrote that Sarkozy had “latched his destiny to that of ‘dear Angela’ and the ‘German model’.”

“The time is long gone when he would, in private, call the chancellor ‘fatso’ and the Germans ‘the Boche’,” it wrote.