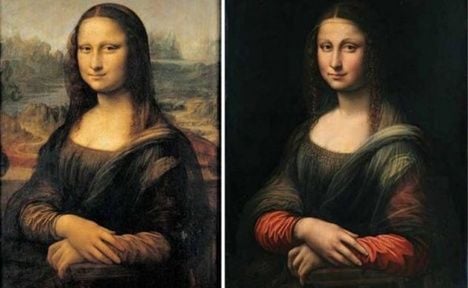 Madrid’s Prado Museum released images of the picture, which had been sitting in its vaults, showing it before and after restoration.

The pre-restoration version showed the same woman Da Vinci painted, looking younger and fresher-faced, but with the same pose and enigmatic smile.

The background was black, covered by layers of black paint that experts have now painstakingly removed.

The restored version shows the woman backed by a landscape of hills and rivers resembling that of the original masterpiece, which hangs in the Louvre museum in Paris.

According to details of experts’ findings published by the specialist British journal The Art Newspaper and the Spanish media, the work is a copy painted in Da Vinci’s studio by one of his pupils.

The Art Newspaper said the find sheds light on how the Italian master’s original was painted. It added that the woman in the famous painting looks almost middle-aged due to traces of old varnish on it.

“This sensational find will transform our understanding of the world’s most famous picture,” the journal wrote.

The museum confirmed the media reports and said it would give further details at a press conference later Wednesday.