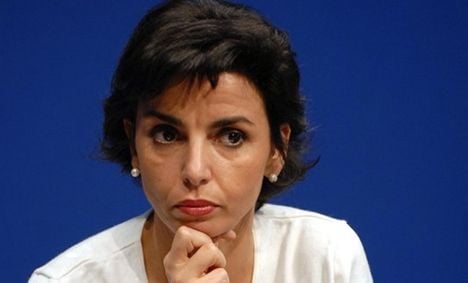 Dati was speaking on the television discussion programme, Le Grand Journal, when she gave the denial.

“There’s nothing in these photos,” she said. “If I was in love every time I had dinner with someone, I’d be in love quite a lot!”

The unmarried former minister, who also serves as mayor of Paris’ chic 7th arrondissement, has always maintained strict control over details of her private life.

In January 2009 she gave birth to a daughter, Zohra, but has never revealed the identity of the girl’s father.

She caused even more surprise when she returned to work just five days after her daughter’s birth.

Vincent Lindon is a well-known French film actor. He starred in the well-received 2011 film “Pater” in which he played a French prime minister.

French media tends to hold back from prying too deeply into the private lives of its politicians and celebrities, yet recently there has been a tendency for greater openness.

On the same programme last week, the singer and actress Vanessa Paradis was herself asked directly about rumours of marital difficulties with her husband Johnny Depp. Paradis denied there were any problems in their marriage.

Rachida Dati served as justice minister for two years until she was moved in 2009. As well as her duties as mayor she also represents the Ile-de-France region in the European Parliament.

Dati was the first child of north African immigrant parents to hold high office in the French government.

She has made no secret of her ambition to enter the French parliament in parliamentary elections due in June.

She was disappointed at the weekend when reports circulated that two Parisian constituencies she had her eye on had been given to other politicians. However, she said she is still “determined” to be a candidate in the elections.