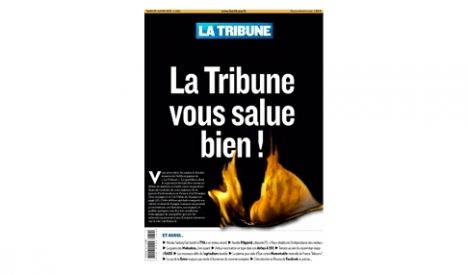 The financial newspaper, which was founded in 1985, is up for sale with two potential buyers looking to save it. However, both have said they will not resurrect the print version of the title, preferring to keep the online version only.

It is just seven weeks since another French newspaper, France Soir, also printed its last edition.

On Monday morning the Paris Tribunal de Commerce (commercial court) announced that the France Economie Régions group will take over the newspaper.

The group, which will form an alliance with Hi-Media, has said it will keep 50 employees of the 165 currently working at the newspaper.

A second group, Financière Patrimoniale d’Investissements, had also been bidding to take over the ailing title.

The current head of the paper, Valérie Decamp, wrote on the newspaper’s websdite that “while our presses may have stopped, the spirit of La Tribune remains intact.”

The most widely-read national newspaper in France is Le Parisien, which also publishes under the title Aujourd’hui en France (Today in France) nationally. Its circulation is 470,000. Le Figaro and Le Monde both have circulations of around 320,000.

The best read newspaper overall in France is regional newspaper Ouest-France which sells around 770,000 copies.