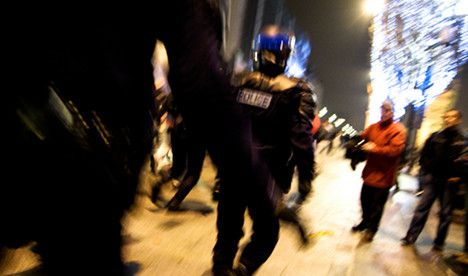 A police spokesman denounced the HRW report as a “caricature” of the force.

HRW warned in its report that unwarranted checks and intimate searches, on top of police insults, were damaging police-community relations.

“It’s shocking that young black and Arab kids can be, and are, arbitrarily forced up against walls and manhandled by the police with no real evidence of wrongdoing,” said HRW western Europe researcher Judith Sunderland.

“But if you are a young person in some neighbourhoods in France, it’s a part of life.”

Tension between the police and the community contributed to widespread rioting in French suburbs in 2005.

HRW criticised the fact that the searches were not recorded by police and that officers did not give any explanation to those people they searched.

Police increasingly touched youths’ private parts during humiliating pat-downs, according to testimony collected by HRW: they could also slap, kick or use electroshock weapons against suspects during arbitrary searches.

If a youth asked why he was being searched, he could be charged with “insulting an officer”, a very broad charge under French law, inhibiting people from asserting their rights, HRW said.

It also quoted a youth in the northern city of Lille who said he had been called “dirty Arab” so many times “it doesn’t shock us anymore — it’s normal.”

The testimony “adds to statistical and anecdotal evidence indicating that police in France use ethnic profiling — making decisions about whom to stop based on appearance, including race and ethnicity,” HRW said.

“Frankly, police-community relations in France are dismal, and everyone knows it,” Sunderland said.

“Taking concrete steps to prevent abusive identity checks — one of the main sources of tension — would be a real step forward and would make a genuine difference in people’s daily lives.”

A national police spokesman denounced the report as unfair.

“This report, which clearly cannot be considered scientific, presents a caricature of the national police,” said spokesman Pascal Garibian.

“It is even quite shocking when it makes reference to ethnic profiling.”