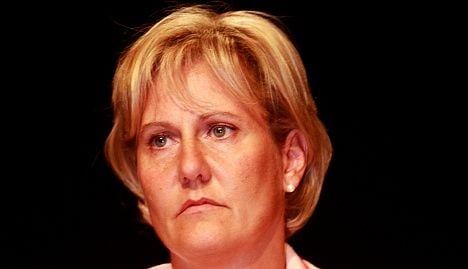 The accident happened in Paris at the weekend while the minister was on her way to the Villacoublay military airport, south west of the capital.

Weekly investigative and satirical newspaper Le Canard Enchainé reported the minister’s convoy was travelling in the opposite direction down the Avenue General Leclerc in southern Paris when the accident happened.

“There was a lot of traffic when one of the two motorcycles hit a pedestrian who was crossing wearing headphones, which stopped him from hearing the sirens. The motorcycle was going at 30 kilometres per hour when he hit him,” she said.

Morano also insisted that she “didn’t ask at any point that we speed up on the way to the airport.”

“I didn’t hear the impact. I was buried in my papers. My chauffeur and bodyguard told me. I also called the emergency services and waited until they arrived.”

Morano also went to see the injured student in hospital and said she had been in contact with his parents.

Morano is a recent convert to the social network messaging site Twitter, where she has built up 40,000 followers.

The comedian Stéphane Guillon used Twitter to advise pedestrians to check on the minister’s travel itinerary so they could avoid those areas in future for their own safety.

“If only we could drive over your stupidity sometimes that would be good,” she hit back.

“Don’t be offended, I’m just trying to save lives,” he retorted.

Morano also got into a Twitter-clash with the Est Républicain newspaper she had spoken to, accusing them of referring to the road accident as a “controversy.”

The newspaper hit back, saying it was not the road accident it had referred to as a controversy.