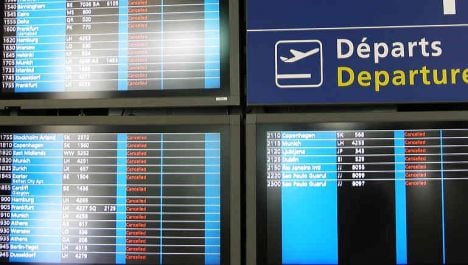 The new rules propose that any worker planning to strike has to inform his or her employers at least 48 hours beforehand. This will give airlines and airports the chance to make alternative arrangements.

Airlines will also be compelled to inform passengers, individually, of any changes to their proposed flights.

The legislation is being introduced by a member of parliament from the governing UMP party, Eric Diard, and has the full backing of the transport minister Thierry Mariani, reported Le Parisien newspaper.

It will be discussed on Tuesday in the country’s lower house, the National Assembly, before moving to the Senate in February.

In 2011, airport security staff took industrial action across the Christmas holiday, causing serious disruption at some of the country’s airports, particularly Lyon.

Action was also taken around the busy All Saints’ holiday at the start of November.

A four day strike in July by Air France cabin crew was called off at the last minute.

The legislation follows successful rules introduced in 2008 on the country’s train and metro networks, which forced a minimum service level during strike periods. Known as the “service minimum”, passengers are guaranteed that there will be at least 20 percent of trains operating even on strike days.

Le Parisien reported that the announcement of the proposed rules themselves provoked calls for industrial action. Pilots have announced they plan to strike in protest from February 4th to 9th.