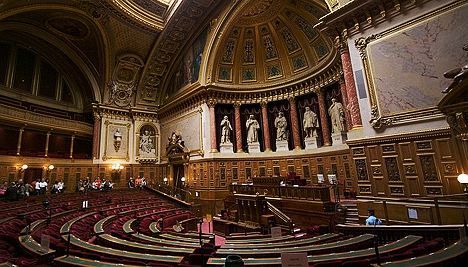 Interior of the Senate, by Romain Vincens

The French Senate on Monday approved, by 127 votes to 86, the measure which threatens with jail anyone in France who denies that the 1915 massacre of Armenians by Ottoman Turk forces amounted to genocide.

French President Nicolas Sarkozy, whose right-wing UMP party put forward the bill, must now sign the bill for it to become law.

Turkey furiously denounced the move, with Justice Minister Sadullah Ergin telling CNN-Turk television that it was “a great injustice and shows a total lack of respect for Turkey.”

“We strongly condemn this decision which is… an example of irresponsibility,” the Turkish foreign ministry said in a written statement, adding that the government would not hesitate to swiftly implement retaliatory measures.

“Politicising the understanding of justice and history through other people’s past and damaging freedom of expression in a tactless manner are first and foremost a loss for France,” it added.

Armenia meanwhile praised the vote, with Foreign Minister Edward Nalbandian saying: “This day will be written in gold not only in the history of

friendship between the Armenian and French peoples, but also in the annals of the history of the protection of human rights worldwide.”

The vote “will further consolidate the existing mechanisms of prevention of crimes against humanity”, the statement said.

France has already recognised the killings as a genocide, but the new bill would go further, by punishing anyone who denies this with a year in jail and a fine of €45,000 ($57,000).

“We have previously determined the steps to be taken if the bill is finally adopted. No one should doubt it,” the state-run Anatolia news agency quoted Davutoglu as saying.

Davutoglu said on Saturday the law would trigger “permanent sanctions”, arguing that it goes against European values and would not help Turkish-Armenian relations.

Trade between France and Turkey was worth €12 billion ($15.5 billion) in 2010, with several hundred French businesses operating there.

“I hope the Senate will not make France a country contradicting its own values,” Erdogan said. “This is a debate which is entirely against the freedom of thought. This is merely a step taken for the upcoming elections.”

Erdogan had closely followed the debate and had met with Davutoglu to put final touches on the measures Ankara could take, according to media reports.

The Turkish media showed intense interest in the vote, with many Turkish news channels broadcasting the session live.

Turkey’s deputy prime minister Bulent Arinc warned that Ankara could ask Europe’s top rights court to denounce Paris if the legislation is adopted, a move he said would be a “historic shame”.

Around 15,000 Turks from France, Belgium, The Netherlands and Luxembourg rallied peacefully on the streets of Paris on Saturday to protest the law.

Several hundred Turks and Armenians separated by riot police demonstrated outside the Senate as the debate began.

Gendarmes were deployed within the chamber, checking the identities of those going in, a rare precaution. Dozens of foreign media, particularly Turkish, filled the press gallery.

The bill has not won universal support in the French government, where some ministers fear it will hurt diplomatic and trade ties with a NATO ally and major economic partner.

Even Sarkozy’s Foreign Minister Alain Juppé has admitted the bill is “untimely”.

Turkey disputes the figure, arguing that only 500,000 died, and denies this was genocide, ascribing the toll to fighting and starvation during World War I and accusing the Armenians of siding with Russian invaders.

France has already recognised the killings as a genocide, but the new bill would go further, by punishing anyone who denies this with a year in jail and a fine of €45,000 ($57,000).