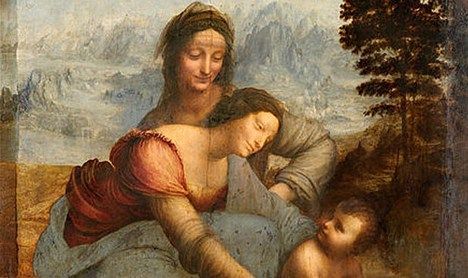 Da Vinci began painting “The Virgin and Child with Saint Anne” in 1503 and when he died in France in 1519 the unfinished work, depicting Christ beside his mother and grandmother with a sacrificial lamb, was acquired by King Francis I.

Restoration carried out in the past century left the “Saint Anne” disfigured by stains, on the Virgin’s dress for instance, due to the ageing of a substance in the varnish and in 2010 the museum decided to restore the work once more.

The “Saint Anne” is to be unveiled to the public in March as the highlight of a major exhibition built around it.

But the project hit a rock last autumn as critics warned that cleaning could damage the masterpiece, and two experts have since resigned in protest from the advisory committee set up to oversee the work.

Both are art world heavyweights: Segolene Bergeon Langle, who left in December, is a French national heritage curator, while Jean-Pierre Cuzin who left in the autumn is former chief curator of the Louvre’s painting department.

A French arts journal first sounded the alarm in October with an article entitled “Leonardo in danger”.

At stake was the type of solvent used to dissolve the yellow-brown coat of varnish covering the painting, deemed too harsh by critics who fear it could remove the actual paint.

Experts especially feared damage to the faces of Saint Anne and the Virgin Mary, and more broadly to the “sfumato” — layers of clear paint used by Da Vinci to produce smoky, softened contours, on this work as on the “Mona Lisa”.

“I deemed that the restoration was not being carried out in line with what I imagined was necessary for this Louvre painting. That is my firm belief.”

One critical point was the question of whether to remove a white patch on the body of the baby Jesus.

The museum’s chosen restorer Cinzia Pasquali, who worked on the paintings of the Chateau de Versailles’ Hall of Mirrors, was convinced it was a patch of varnish, turned white by microscopic cracks, and wanted to remove it.

Bergeon Langle believed it may have been added by Da Vinci’s own hand — and was wary of any intervention.

Finally Vincent Pomarede, the head of the Louvre’s painting department, went ahead and green-lighted its removal after having it analysed.

“On that issue, we were in disagreement,” he told AFP this week. “But I have the laboratory results and they are conclusive. I was certain it was a cracked varnish, and you can see plainly from the final result that it is.”

“I have no regrets,” said Pomarede, who has insisted the Louvre is not putting the work at risk.

Last autumn the Louvre invited journalists to view the painting in the workshops of the French Museums’ Centre for Research and Restoration, the C2RMF, next to the Louvre, to defuse tensions.

In 1994, the Louvre had to abandon an earlier plan to restore the “Saint Anne”, over fears for its delicate “sfumato”.

At the time, explained Pomarede, the Louvre did not have the technical know-how to protect the work. Now, however, he said it was possible to measure the thickness of the varnish down to the last micron.

On the subjects’ fragile faces, for example, the restorer left an extra thickness of varnish: 16 to 17 microns, against 8 to 12 microns elsewhere — and down from 30 to 35 microns previously.

Early this month the scientific committee met and handed down a “positive verdict on the thinning of the varnish and the removal in places of additional layers of paint,” said Pomarede.

“Two or three experts even wanted to go further” including removing secondary tree trunks that are thought to have been added in the 19th century,” said Pomarede — who ruled to keep the trunks as they are.

Since then the Louvre says tensions have simmered down with the dissenting experts.

Pasquali is putting the finishing touches to the work but this phase of the work is all reversible unlike removing varnish, and “should be a more serene period,” Pomarede said.

But Bergeon Langle, who was received by the head of the Louvre Henri Loyrette early this month and has another meeting planned with Pomarede, told AFP she still had “doubts” over the progress of the work.

“As a general rule, I prefer old works to be cleaned only very lightly. You can never retrieve the original colours, what you get instead is the current state of the painting materials. Leaving a slight veil over the work makes it more harmonious,” she explained.