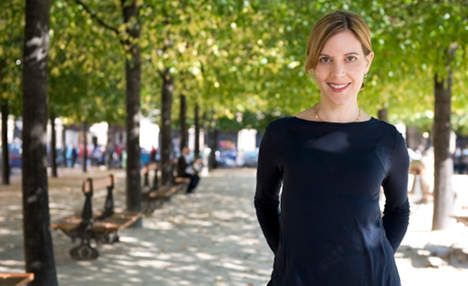 Indeed, they seem strangely happy to sit calmly at the table and even eat their greens while their parents enjoy a relaxed lunch. What causes this cultural peculiarity? Matthew Warren spoke to the author of a new book that may have the answers.

Paris-based writer Pamela Druckerman had something approaching an epiphany while on a seaside holiday in France with her husband and 18-month-old daughter, who she nicknames ‘Bean’.

“We were staying in a little hotel and had all our meals in restaurants around the port,” she explains when we meet in a café in Paris’ Marais district.

“Each meal got worse. Bean would eat some french fries, then tear apart some sugar packets, then demand to get up.”

So far, so toddler. Yet Druckerman also noticed something else.

“After a couple of days of this I looked around and realised there were all these French families who were having a completely different experience. They were having long multi-course meals with children who were eating their vegetables and sitting in their high chairs.”

“They weren’t in hell, they were on holiday.”

She was also struck by the fact that the children themselves, while well-behaved, were otherwise normal kids.

“They weren’t robotic, joyless children. They were happy, boisterous and curious and their parents were talking to them. They just weren’t having fits. That was the big difference.”

The discovery set Druckerman on a mission to figure out what French parents do differently to others, particularly those in English-speaking countries. She wanted to find out, in her own words, “how I could get some of that.”

That mission is recounted in her new book, French Children Don’t Throw Food (to be published as Bringing Up Bébé in the US). It is a fascinating and entertaining journey through her exploration of how the French bring up children and how she then tries to apply it to her own family.

As she peers into the world of Gallic child-rearing, she discovers that not only do French children behave better at the dinner table, they also seem to sleep better, learn good manners and are less prone to shrieking tantrums.

So, what makes the French approach so effective?

Druckerman describes it as “a combination of being very strict about a few key things but also giving children lots of freedom.”

French parents tend to set rigorous rules around a few key areas including food, meal times and sleeping. They also teach children the importance of waiting, rather than giving in immediately to each new demand.

Beyond these key areas, parents are not expected to be constantly focusing on their children. The over-attentive, over-stimulating “helicopter” parenting practised elsewhere is frowned upon in France.

As an example, she recalls taking her daughter to a park armed with toys to interest and entertain her. Meanwhile, one picnic rug across she sees a French mother reading a book while her daughter plays happily with the grass and bounces a ball. It was clear which mother was having the more relaxed afternoon.

“In studies, French mothers put much greater value on teaching children to play by themselves,” she said.

She was careful to check that her observations weren’t just limited to a few chic mothers in Paris’ most fashionable districts and spoke to people up and down the country.

She also consulted experts and looked at scientific studies on raising children.

“What the French do en masse is actually what a lot of scientific research agrees is what works. I looked at a lot of research on sleep, praise and food and it correlates almost exactly with what French parents widely do.”

Druckerman’s book taps into a global debate about parenting methods. A hugely controversial article in the Wall Street Journal by Amy Chua advocated strict Chinese parenting methods, banning children from sleepovers, acting in school plays, watching TV or achieving anything other than A-grades.

So is Druckerman worried about a backlash? And are we really ready for yet another book telling us how the French are so much better than us?

“There have been strong reactions already but this book is not about the top ten things you must do to raise a well-behaved child. It’s about a whole different way of looking at children and your relationship to them and your role as a parent. I hope people will find that interesting and compelling.”

Delphine is a Paris-born marketing executive who now lives in London with her German husband and two children, a boy aged two and a girl aged six months. She agrees with some of the book’s observations.

“The big difference for me is around food and meal times. It’s a cliché but it’s true that food is important for us. Not only what we eat but how we eat. Mealtimes are an important social event.”

She also thinks there are plenty of troublesome children in France as well.

“In France we talk about l’enfant roi, the child king. Everything he says has to be done and everything he asks for has to be given. Some parents want to be friends with their kids.”

When it comes to mothers, Delphine has noticed a difference in attitudes to working.

“Only well off women in France would choose not to work, whereas in the UK a lot of women stop work and make their careers less of a priority.”

Druckerman thinks the attitude to work is helped by the fact that France has cheap, almost-universal childcare provided by the state.

As well as specific ideas about how to bring up children, French couples seem determined not to let themselves become defined by their new status as parents. Staying attentive to your relationship, or “le couple” as the French call it, is seen as key.

The term, commonly understood in France but slightly mystifying outside, refers to the woman’s pelvic floor area. The “re-education” is both for health reasons and also for getting it back in shape for sex. Readers will be happy to know Druckerman provides a detailed and amusing account of her own “re-education”.

“There is a temptation to sacrifice everything for the child and forget about your relationship, but that is seen as a bad idea both for you and the child,” she says.

In the book, Druckerman insists that French parents love their children as much as anyone else. Indeed, setting clear rules and expectations is seen as a way of helping the child develop and flourish.

“This Anglophone idea that the child must be at the centre of everything and that the lives of the adults must revolve entirely around the child just doesn’t exist in France,” she says.

By the end of the book, and with two more children in tow, Druckerman is ready to return to the seaside resort of her first revelatory moment about French parenting. Armed with her newfound knowledge she is pleased to discover a huge improvement.

“We order our food calmly, and in courses,” she writes. “Everyone stays in their seats and enjoys their food. Nothing lands on the floor and there’s no shouting. We even have coffee at the end of the meal.”

French Children Don’t Throw Food by Pamela Druckerman is published in the UK by Transworld Publishers on January 18th and will be published by The Penguin Press as Bringing Up Bébé in the US on February 21st.