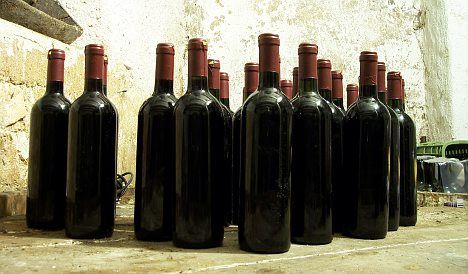 In Hong Kong at the weekend, a hotly anticipated Sotheby’s fine wine auction fell well short of its estimate, as top-ranking wines from the French region, from Chateau Lafite to Margaux, failed to find buyers.

Robert Sleigh, head of Sotheby’s Wine, Asia, attributed the disappointing sale to a tailing-off in demand for younger Bordeaux vintages.

The auction came as a key industry index, which tracks the price of 100 investment-grade wines, 95 of them from Bordeaux, revealed a sharp fall over the past year — suggesting that a speculative bubble is bursting.

“The Liv-ex Fine Wine 100 Index fell by 22 percent since its peak at the end of June 2011,” Jack Hibberd, head of data and research at the London-based Liv-Ex, which analyses fine wine markets, told AFP by email.

“For the full year the fall was 15 percent.”

Xavier Coumau, president of the Wine Broker’s Syndicate, told AFP, “I think of this as a market correction.”

Hibberd said there were several reasons for the drop in prices, “from fears over the economy, particularly in the eurozone, to the overpricing of the 2010 Bordeaux vintage, which robbed the market of its momentum.”

“Key, however, has been a slowdown in demand from China — the main driver of the market over the past 24 months,” he said.

To put it bluntly, “China is not buying at silly prices any longer,” said Antonin Michel, coordination manager at the wine merchant Diva.

The outlook for the heart of Bordeaux’s production remains good, Coumau says, with the volumes of everyday wine exported to China still growing exponentially.

But it’s the Classified Growths, referring chiefly to wines ranked in a historic 1855 classification of Bordeaux vineyards, that are of key concern to wine critics, investors and analysts like Liv-ex.

These wines account for little more than five percent of the 733 million bottles produced annually in the region, but generate big revenues.

At negociant Diva, for example, two-thirds of its €33 million in revenue last year came from Classified Growth, according to Michel.

For the last seven years, Liv-ex has shown nearly uninterrupted price increases in Bordeaux’s blue chip wines, with the only other significant drop occurring during the last six months of 2008.

When China entered the game three years ago, the market caught fire.

Demand exploded in particular for names such as Lafite, Latour, Mouton Rothschild, Margaux and Haut Brion, wines that were named as First Growths — the very top rank in the 1855 classification.

Chateaux and speculators, hoping to cash in on China’s thirst for luxury products in the form of these First Growths, pushed the prices “sky high”, says one wine merchant.

Many other Classified Growth wines have been riding on their coattails.

When the chateaux released their wine as a futures commodity last year, wine merchants took their allocations of wine for fear of losing their supply next year — but were unable to resell some of the wine.

This left the merchants in a “cash crisis with very high levels of stock”, according to Michel.

The futures campaign ended just as prices peaked on June 28th, 2011. And since then the bullish market has turned bearish, with prices visibly softening.

Some suggest the 2010 futures campaign left a bitter taste in the mouths of Chinese clients, many of whom were buying Bordeaux futures for the first time.

“We explained the risks, but their passion is wine. They wanted to be part of it. Now our mainland customers say they felt desperately cheated by the 2010 futures,” said Simon Staples, sales director of London wine merchant Berry Bros and Rudd, in a telephone call from Shanghai.

Other experts suggest a degree of investor fickleness is involved.

“Some of the Chinese super rich are getting tired of Lafite,” Georges Tong, vice president of his family’s toy company and prominent Hong Kong wine collector, told AFP.

“Presenting a bottle of Lafite as a gift is not as fashionable as before. Gift recipients are now demanding Domaine de la Romanée Conti,” referring to the Burgundy wine that can easily cost €12,000 a bottle.

At the same time, fear of a deep eurozone recession and a real-estate bubble in China encouraged skittish investors to sell their most speculative wine investments.

“There’s fear of the property bubble that is making people anxious,” said Don St. Pierre, Jr., CEO of ASC Fine Wines, with 24 offices across China and one of the most powerful importer-distributors in the region.

“People who have been holding these speculative wines are selling, so that’s bringing down prices.”

According to several sources, the credit squeeze coupled with doubtful returns, prompted some Chinese customers to commit the ultimate Bordeaux taboo, and cancel their 2010 futures orders.

“There has been a wave of cancelled orders after the last futures campaign,” confirmed Michel. “All of these elements combined can account for a steady drop in demand for First Growths.”