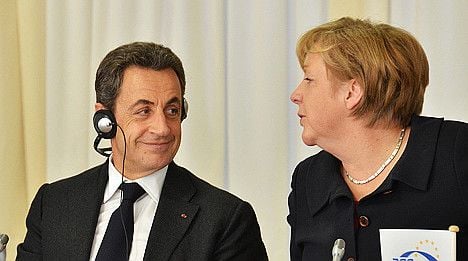 Chancellor Angela Merkel hosts President Nicolas Sarkozy for talks in Berlin to kick off a flurry of diplomatic activity ahead of a key EU summit on January 30th that leaders hope will provide new impetus to efforts to stem the crisis.

However, facing an uphill battle for re-election this year, Sarkozy has thrown a spanner in the works by vowing to introduce a highly controversial tax on financial transactions, on his own if necessary.

“We won’t wait for others to agree to put it in place, we’ll do it because we believe in it,” Sarkozy said on Friday after talks in Paris with Italian Prime Minister Mario Monti.

But Monti, who is due in Berlin for talks with Merkel on Wednesday, urged France not to go it alone and Germany also resisted the call, saying it was trying to build a broad consensus for such a levy.

“We would like to see a global financial transaction tax but that is not possible at the present time,” Merkel’s spokesman Steffen Seibert told reporters at a regular news briefing.

“The German government would thus aim to introduce the financial transaction tax within the EU,” he added.

Seibert said the tax, which would have to be agreed unanimously within the EU and is fiercely opposed in Britain, was one of several issues on the agenda for the two leaders, together dubbed “Merkozy”.

“It is mainly about preparing the European summit at the end of January and its goal is to debate measures to boost competitiveness and growth,” the spokesman said.

British Prime Minister David Cameron vowed to block any attempt to introduce an EU-wide financial transaction tax because he said it would harm jobs and prosperity in Europe.

And the Association Paris Europlace, which represents key players in the French financial world, said such a tax would hurt the country’s economy unless it was implemented across the European Union.

Analysts say time is running out to hammer out the details of a “fiscal compact” agreed in principle in December that would tighten up budgetary discipline for all EU members except Britain, which has opted out.

“Whatever the outcome of these discussions (between France and Germany), a clear post-crisis landscape … needs to be mapped out at the forthcoming EU summits,” said Thomas Harjes from Barclays Capital.

“Without this, the crisis will continue to pose serious risks to the euro area’s cohesion,” he added.

Adding to the pressure in the run-up to the Berlin meeting was a raft of disappointing economic data from the eurozone, including joblessness hovering at a record high and slumping consumer and business confidence.

Meanwhile, the euro tumbled to another 16-month low against the dollar, falling under the $1.27 mark and Italian borrowing costs rose above the seven-percent barrier that many economists consider to be unsustainable.

Also on Merkel and Sarkozy’s plate at the lunchtime meeting is Hungary, after the International Monetary Fund and EU officials broke off talks over a possible credit line due to concerns over the independence of the central bank.

The tete-a-tete is the first of a series of high-level meetings to prepare the EU summit on January 30th.

After Monti’s visit to Berlin on Wednesday, a three-way France-Germany-Italy summit will take place in Rome on January 20th, three days before a key meeting of eurozone finance ministers in Brussels.