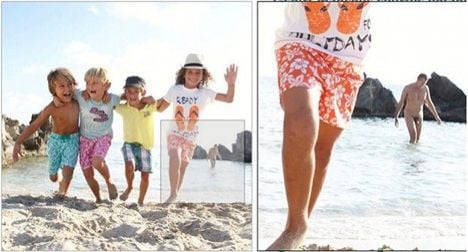 The photo of four young children with their arms around each other running on the beach while a naked man walked serenely through the sea behind them was removed from the site but has since gone viral on the Internet.

“An internal enquiry has also been opened to determine how the error happened,” she said.

A message on La Redoute’s Facebook page said the company “apologises for the photo published on its site and is doing what’s necessary to remove it”.

“We’re aware that this may have offended some web users,” La Redoute said, promising to “reinforce the validation process for all marketing so that this does not happen again”.

Comments on La Redoute’s Facebook page ranged from “to err is human” to accusations of “a marketing coup by La Redoute’s web team ahead of the winter sales”.

Web users meanwhile used the site’s magnifying glass function to extract a high-resolution image of the unknown man and paste it into a variety of inventive collages now doing the rounds on the Internet.

The naked man can be seen alongside a holidaying President Nicolas Sarkozy, behind the first men on the Moon, fighting Darth Vader or wearing the face of scandal-hit former International Monetary Fund chief Dominique Strauss-Kahn.

La Redoute has a reputation for being web-savvy. However, it has been the target of Internet mockery before after selling a kids’ T-shirt emblazoned with the incorrectly spelled “Enjoy HolyDays”.