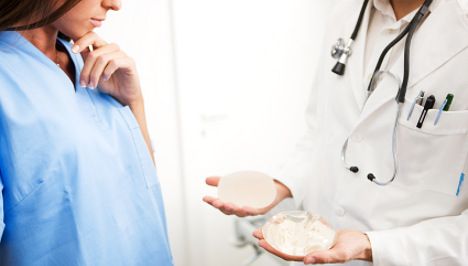 The growing litany of accusations against now-defunct Poly Implant Prothese has triggered a worldwide scare with several countries, including France, advising thousands of women to have the implants removed.

France’s RTL radio said it obtained an exact breakdown of the materials used in the faulty implants, including Baysilone, Silopren and Rhodorsil, all of which are industrial products never tested or approved for clinical use.

The products, used in the oil or rubber industries, allegedly contributed to the silicone gel implants having a high rupture rate.

French authorities including health safety agency AFSSAPS already knew that the implants contained industrial rather than medical quality silicone, but this is the first time the use of petroleum industry additives has been reported.

“According to the AFSSAPS, it was known that this was an unsuitable gel, usually used in food manufacturing or for computers,” a doctor advising implant wearers, Dominique-Michel Courtois, told AFP.

But “there was no way of knowing that the gel contained an additive for fuel. That’s why we want implants removed from patients to be analysed themselves,” added a lawyer for implant wearers, Philippe Courtois.

AFSSAPS previously carried out tests on implants seized at PIP’s factory in the south of France in March 2010.

A lawyer for PIP’s 72-year-old founder Jean-Claude Mas sought to play down the importance of the use of oil and rubber additives.

Mas met with AFSSAPS representatives on Monday for the first time since the scandal broke, Haddad later told AFP.

“He met with AFSSAPS representatives for three hours without police,” Haddad said, calling it “an event that should calm people down.” He did not provide details.

Implant wearers’ lawyer Courtois called for tests to be carried out on implants sold abroad, after British media revealed that rupture rates on the PIP products were seven times higher than previously thought.

“The mix (of ingredients) could vary depending on the deliveries,” he said.

It also emerged on Monday that workers at PIP’s sales department sent each other emails indicating they knew there was a problem with the implants’ shells as early as 2005.

“Another one! Another breakage of the shell from a 2003 implant… Still no explanation?” read one of the emails obtained by AFP.

“How can it be that on opening a box the surgeon finds a hole (in the implant), and therefore a gel leak?”, “If a shell problem were to erupt, you can imagine what would happen,” implant salespeople wrote.

“Sales are more important than what the shells are made of,” replied a PIP marketing boss.

Based in the south of France, PIP was shut down and its products banned in 2010 after it was revealed to have been using industrial-grade silicone gel that caused abnormally high rupture rates.

It is alleged that the company improvised its own ingredients when it faced financial difficulties.

Between 300,000 and 400,000 women in 65 countries from Europe to Latin America have implants made with the sub-standard gel.

France last month advised 30,000 women to have their PIP implants removed because of an increased risk of rupture, although officials have said there is no proven cancer risk.