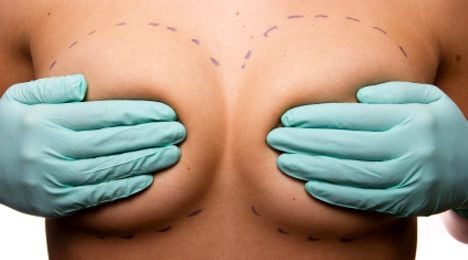 Tens of thousands of women worldwide have been fitted with the implants, which were made from industrial rather than medical grade silicone.

France’s health ministry recommended last week that the 30,000 women in the country with the implants have them taken out, saying that while there is no proven cancer risk, they could rupture dangerously.

In the United States, PIP implants were sold through Heritage Worldwide until May 2000, when the US Food and Drug Administration launched a moratorium on silicone implants.

At the time, the US market accounted for 40 percent of Heritage Worldwide’s revenues, or $4 million (€3 million), according to corporate documents filed in 2009 with the US Securities and Exchange Commission.

The firm posted significant losses in subsequent years, especially starting in 2007, as both users and distributors filed complaints against the company.

Between 1996 and 2009, PIP was the target of several dozen lawsuits in the United States, filed not only by women using the implants but also by its business partners, claiming breach of contract or unmet payments.

A February 2009 document cites three complaints in Florida — filed in October 1999, June 2000 and July 2003 by five members of the Kwartin family against PIP, its affiliates and founder Jean-Claude Mas.

The plaintiffs said they were shareholders of PIP distributor PIP/USA, Inc. and were seeking unspecified damages from PIP and other stakeholders “arising out of alleged tortious and other purported wrongful acts,” the document added.

The complaints were later consolidated into a class action lawsuit in 2005.

Dozens of women began filing lawsuits against PIP, mainly for product liability, starting in 2003, including in Illinois and Texas. But as of 2009, no trial date had yet been set. Many of the lawsuits were later dismissed.

The complaints cited defective merchandise not suited for its intended purpose and violations of local consumer legislation.