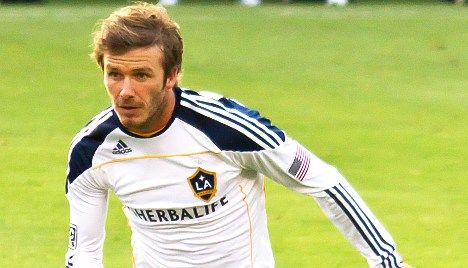 Beckham has become a target for Paris Saint Germain with the club’s owners, Qatar Sport Investments (QSI), said to have offered the former England midfielder a lucrative deal to help turn their under-achieving side into one of Europe’s top clubs.

A fortnight ago reports from the capital said PSG had stepped up their bid by finding a school — the British School of Paris — in the outskirts of the capital for the three school-aged of his four children.

Now estate agents in and around the capital are in a race to find a property which suits both Beckham and his wife Victoria, who rose to fame as ‘Posh’ in the successful girl band the Spice Girls but who is now a respected fashion designer.

“Victoria Beckham visited a luxury townhouse in the Avenue Montaigne, in the fashion quarter, on the weekend of November 11th,” Marie-Helene Lundgreen, the head of Belles Demeures de France, told AFP.

The same company also offered to sell the Beckhams a luxury townhouse located at Place des Victoires in the fashion-conscious second arrondissement, which could house the whole family and allow Victoria Beckham to open her own designer store close by.

Agents have also been giving thought to Beckham’s need to be close to PSG’s training complex, the Camp des Loges, at Saint-Germain-en-Laye – a well-heeled suburb around 20km from the city centre.

Properties near the Camp des Loges have been found at nearby Marne-la-Coquette and Maisons-Laffitte.

Some agents, however, are counting on the Beckhams renting first.

Thibault de Saint-Vincent, president of the Barnes property group, has found what he believes to be a suitable rental property in the chic 16th arrondissement.

“I think they would probably want to rent at first,” said De Saint-Vincent.

Beckham played what may have been his last match for American club LA Galaxy in early December when the Major Soccer League champions beat Australian club Melbourne Victory 4-3 on penalties in an exhibition game.

He is said to be mulling another spell with the Galaxy, or other European options.