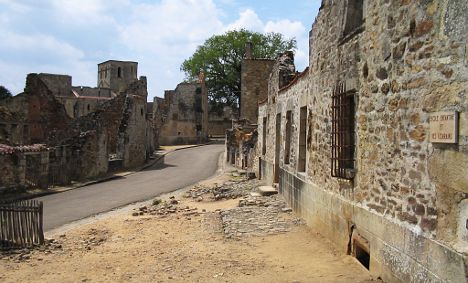 The raids, carried out in recent weeks in cities across Germany, were part of a murder probe into the men, believed to have been part of a Waffen-SS unit called “Der Führer”.

The men, aged 18 and 19 at the time, have “either denied their participation in the massacre or were not fit for questioning, according to the investigators’ first impressions,” prosecutors said.

Authorities had hoped the raids would unearth documents like diaries that would link the men to the massacre that took place in the French village of Oradour-sur-Glane on June 10th, 1944.

However, prosecutors in the western city of Düsseldorf acknowledged that “until now, no substantial evidence had been uncovered during the raids.”

Four days after the Normandy landings that marked the start of the liberation of France and Europe from Nazi occupation, Oradour was destroyed by a detachment of SS troops for reasons that have never been made clear.

They ordered the town’s 642 inhabitants, including some 200 children, to assemble in the village square.

Women and children were then herded into the church which was pumped full of toxic gas and set on fire. The men were machine-gunned and burned alive in a barn. The entire village was then torched, never to be rebuilt.

In France, the slaughter has come to symbolise the worst of Nazi barbarity and the village has been left as it was as a memorial.

One of the last survivors of the massacre said on Monday he was “pleasantly surprised” by the news of the raids.

“I am surprised, pleasantly surprised, that searches are still going on, that they are still looking for the criminals,” said Robert Hebras, today 86.

“It would surprise me if these people were the ones who gave the orders — at the time they were about my age, barely 19,” he said from his home in the village of Saint-Junien, not far from the site of the massacre.

Around 60 soldiers were brought to trial in France over the massacre in the 1950s, and 20 of them convicted, but all were released within a few years.

Since the Nuremberg trials after the war, where several top Nazi henchmen were sentenced to death, German authorities have examined more than 25,000 cases but the vast majority never came to court.

Recently, with many of the suspected war criminals in or approaching their 90s, there has been a minor flurry of arrests and court cases in Germany dealing with war-time atrocities.