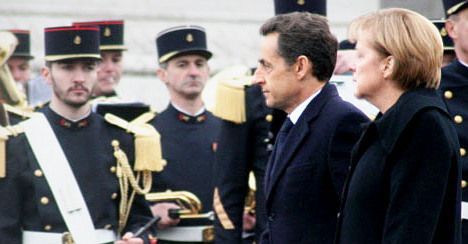 The two leaders made the announcement after crunch talks in Paris at the start of a crucial week for the euro, teetering on the brink because of its indebted member states ahead of a key EU summit in Brussels on Thursday.

“The goal that we have with the chancellor is for an agreement to have been negotiated and concluded between the 17 members of the eurozone in March, because we must move quickly,” Sarkozy said, warning of a “forced march to re-establish confidence in the euro and the eurozone”.

Sarkozy said that the new treaty would be either for all 27 EU members or for the 17 members of the eurozone, with other nations signing on a voluntary basis.

The Franco-German proposal is to be detailed in a letter to EU president Herman Van Rompuy on Wednesday, the day before the EU summit convenes in Brussels.

The two leaders backed automatic sanctions against EU member states whose deficits go over three percent of GDP and called for a “reinforced and harmonised Golden Rule” on the deficits of eurozone states.

The European Court of Justice should be tasked with verifying that national budgets obey deficit rules, but it should not be able to declare budgets “null and void”, Merkel said.

With debt contagion threatening to spread throughout the eurozone, Italy kicked off a critical week by presenting a draconian package of cuts, taxes and pension reforms to parliament as Europe tries to pick up the pace to keep the euro alive.

Prime Minister Mario Monti warned that Italy risks a Greek-style “collapse” if it is not adopted, as financial markets cheered the proposals.

Italy, the eurozone’s third-biggest economy, is desperate to prove to its European neighbours that it should be part of the discussions on saving the eurozone — rather than being seen as one of its biggest problems.

Ireland’s Prime Minister Enda Kenny also on Monday announced a €3.8 billion austerity budget, a day after warning citizens to brace for years of economic hardship during a historic television address.

The call in Paris for tighter discipline and the austerity measures in Rome saw Italy’s long-term borrowing rate fall back below the key 6.0 percent threshold soon after.

At 1505 GMT, the rate of return on Italian government 10-year bonds fell to 5.983 percent, dropping below 6.0 percent for the first time since the end of October.

Experts consider borrowing rates above 6.0 percent to be unsustainable in the long term for countries with slow growth and low inflation.

It was hoped that Monday’s proposals would be seen as a credible guarantee that eurozone governments will at last bring their deficits under control and thereby satisfy restive markets.

European Central Bank chief Mario Draghi has said he could then take action, and many hope the bank will intervene to protect European banks from a credit crunch and buy bonds to rein in soaring rates on government borrowing.

However, Sarkozy said that Germany and France were “in complete agreement to say that eurobonds are in no case a solution to the crisis, in no case.”

“How can we convince others to make the efforts we are making ourselves if we pool our debts as of now? None of this makes any sense.”

Sony Kapoor of the Re-Define think tank warned: “It is far from obvious that the ‘stability union’ envisaged in the Franco-German discussions addresses the main structural and governance failings of the eurozone.”

“After two years of the euro crisis they have reached an agreement to reach an agreement a few months down the line and sign it into force over the next few years.”

Sarkozy called for European summits to be held every month while the euro crisis raged, and for the meetings to have “precise agendas” with markets having in the past accused eurozone leaders of dithering.

Amid concern that the eurozone crisis will trigger a global economic downturn, US Treasury Secretary Timothy Geithner has also been dispatched to Europe, where he arrives on Tuesday to pressure leaders to take effective action on the debt crisis.