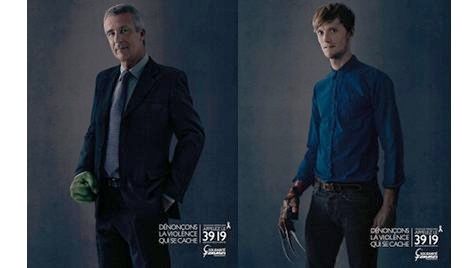 The series of three advertisements has been launched by the campaigning organization against violence towards women Fédération Nationale Solidarité Femmes and aims to encourage women to report violence.

The timing of the campaign coincides with the International Day for the Elimination of Violence Against Women, which was held on Friday.

Each advertisement shows a respectable-looking man who, on closer inspection, has the hand of a monster. One has the enlarged green fist of the Incredible Hulk while another has the sharp razor-like fingers of horror movie character Freddy Krueger.

The telephone number 39-19 is given as a source of support for women looking to report violent partners.

“There are always two faces and the public face is often affable, completely normal and virtually beyond suspicion,” said Françoise Brié, vice-president of the federation. “They can be found in all ages and all walks of life.”

In an attempt to dispel the myth that violent men are more likely to be socially disadvantaged, the association released figures showing that one in five have professional jobs.

In terms of age, around half are between 30 and 49 with a further third over 50.

The organization reports that 146 women were killed by their partners in 2010, almost three a week.