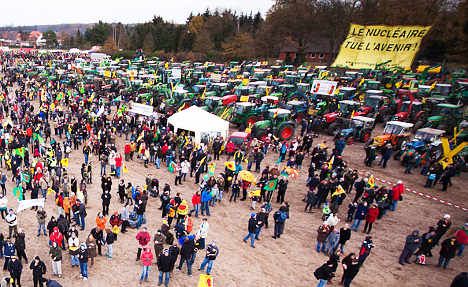 The train arrived at Dannenberg for unloading at 5.04am on Monday after leaving nuclear giant Areva’s rail yard at Valognes, northwestern France on Wednesday and negotiating a string of obstacles set by anti-nuclear activists.

From Dannenberg rail station, its cargo of 11 containers of waste is due to be unloaded onto trucks, a process likely to take several hours.

Then it will begin the final 20-kilometre (12-mile) leg of the journey by road to the Gorleben storage facility, a former salt mine, on the River Elbe.

On Sunday, German police battled thousands of anti-nuclear protestors, many chained to railroad tracks, as they tried to block the train.

Thousands of activists swarmed the tracks along the route near the train’s final destination in Dannenberg and boasted that the odyssey had now topped the 92-hour record set during a shipment one year ago.

Police said they detained about 1,300 people, including some who had chained themselves to the railway, requiring tricky and time-consuming operations to free them before the train could slowly rumble on.

About 150 people were injured in clashes, most of them demonstrators, according to security forces quoted by German news agency DPA.

Monday’s final road stage of the journey is also likely to be delayed by protest action, with campaigners already gathered near the Gorleben site.

Organisers said on Sunday about 23,000 protestors had gathered in Dannenberg, while police put the number at 8,000. About 20,000 police had been deployed along the train’s German route.

The waste had been produced in German reactors several years ago and then sent to France for reprocessing before beginning its return journey last week.

The protesters argue that the shipment by train of spent fuel rods is hazardous and note that Germany, like the rest of Europe, has no permanent storage site for the waste, which will remain dangerous for thousands of years.

They are also angry that a pledged German phase-out of nuclear power, hastily agreed this year in the wake of the Fukushima disaster in Japan, will take another decade to implement.

The demonstrators had travelled from across Germany as well as from Belgium, the Netherlands, France and Italy, organisers said.

Most of the protests have been peaceful.

But there were isolated outbreaks of violence on Thursday and Friday near Gorleben where 10 masked rioters attacked police with bricks and smoke bombs before managing to escape.

In November 2010, about 50,000 protesters delayed a similar shipment by a day. Since then, Berlin has agreed to shut down all 17 of the country’s reactors by the end of 2022.