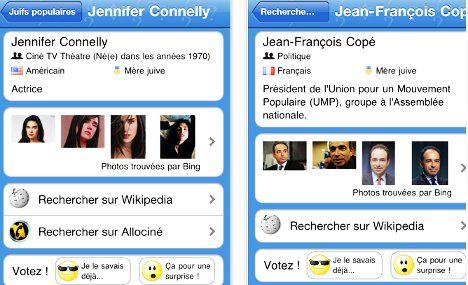 Groups including the French Jewish Students Union, SOS Racisme and the Movement Against Racism and for Friendship Between People had brought a suit against Apple in Paris demanding it withdraw the app worldwide.

“Listed for you, thousands of Jewish personalities (through their mother), ‘half-Jewish’ (through their father), or converts,” the app’s inventor Johann Levy promised potential buyers on the French Apple Store.

Rights groups dropped their suits “after the withdrawal of the application from every country in the world, which satisfies our demand,” the groups’ lawyer Stephane Lilti said in court.

Apple on September 14th withdrew the app from its French online shop after an outcry from rights groups, which demanded the California-based computer giant also drop the app from its other stores.

On October 18th Apple withdrew the app from all its online stores in Europe, but the app, listing 3,500 Jewish personalities, was still available elsewhere in the world.

The International League Against Racism and anti-Semitism (LICRA) has also dropped its demand that Apple uninstall the app from all devices where it has already been installed.

“Where is the anti-Semitism in this case?,” Apple’s lawyer, Catherine Muyl, said during a hearing for the LICRA case on November 17, insisting that “this is not a discrimination case.”

“When Johann Levy conceived his application, he was worried that it would be perceived as too ‘pro-Jewish’,” Muyl explained.