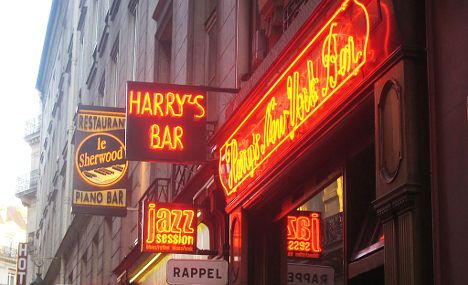 And as the venerable establishment prepares to mark its 100th birthday on Thursday, Harry’s Bar remains what it has always been, a small corner of Manhattan in the heart of Paris.

“Every time I’m in Paris I have to come here to get a cocktail,” former New Yorker Michael Formosa said sipping a Gibson — a Martini with a pickled onion instead of an olive.

“You can feel the whole history — it takes a very long time to create this kind of feel of a place,” said the 40-year-old, now a London-based consultant.

“I lived in New York for 12 years and this is like something you would find around the corner from Penn Station.”

Tucked away on a side street in central Paris under a red-and-gold neon sign, Harry’s Bar could not be more different from the traditional French brasseries and bistros that surround it.

Behind an aged wooden bar, white-aproned barmen expertly mix the driest of Martinis or pour out tumblers of single-malt Scotch. No coffee or wine is served in the evening and there is no music or television to distract from conversation.

“It’s not a trendy place,” owner Isabelle MacElhone told AFP in a quiet corner of the bar, “but this is why it will never be out of fashion.”

The MacElhones have been at the heart of Harry’s Bar since its opening on Thanksgiving Day 1911 — an event that will be marked this week with a party for 300 guests and the publication of a book on the bar’s history.

Harry MacElhone, a Scot from Dundee, was hired as bartender by original owner Tod Sloane, an American jockey living in Paris who opened “The New York Bar” after complaining he could not find a proper cocktail in the French capital.

Keen to recreate the atmosphere of a pre-Prohibition stand-up saloon in Paris, Sloane had the interior of a Manhattan bar completely dismantled and shipped across the Atlantic to Paris.

The original mahogany bar and walls, decorated with shields of dark wood bearing the insignia of US universities, remain fixtures of the place to this day.

Sloane sold the bar to Harry MacElhone in 1923, he put up his name above the door, and it has been known simply as “Harry’s” ever since.

The bar became a favourite of American expats in Paris, especially the “Lost Generation” of writers of the 1920s that included F. Scott Fitzgerald and the hard-drinking Hemingway, a regular for many years and a close friend of the MacElhone family.

It has hosted film stars from Humphrey Bogart to Clint Eastwood.

Since 1924 Harry’s has been known for its presidential election straw polls of Americans living in Paris, which have accurately predicted the winners in all but two cases: Jimmy Carter in 1976 and George W. Bush in 2004.

The bar has also featured in works of fiction — Ian Fleming’s fictional spy James Bond called Harry’s the best place to get a “solid drink” in Paris — and it was said to be where George Gershwin composed the music for “An American in Paris”.

Its famous list of clients is matched by its famous cocktail creations.

The Bloody Mary, a mixture of tomato juice, vodka and spices, was first served at Harry’s in 1921, and the French 75, White Lady and Sidecar were dreamt up at the bar as well.

Harry died in 1958 and the bar was taken over by his son Andy and then his grandson Duncan, Isabelle’s husband, who died in 1998. Their son, 23-year-old Franz-Arthur, plans to eventually take over the business.

Despite the bar’s long association with Americans in Paris, many of the guests at Thursday’s anniversary celebrations will not be expats but Parisians, who have increasingly adopted Harry’s Bar as their own.

“We have many American clients but in recent years Parisians have also appropriated Harry’s Bar,” manager Alain Da Silva said.

“These are people who have travelled a bit and are very happy to be able to find this small piece of America in Paris.”

Sharing drinks at the bar, Parisian television director Patrick De Souza and expat US businesswoman Anna Whitworth said it was the sense of being part of the bar’s long history that kept them coming back.

“The barmen are dressed in white, the service is impeccable. This is a bar with tradition,” said De Souza, 56.

“You can sense the history here,” said Whitworth, 45. “The main thing is that people feel very welcome and they like the fact that it doesn’t change, when everything else around us is changing so fast.”