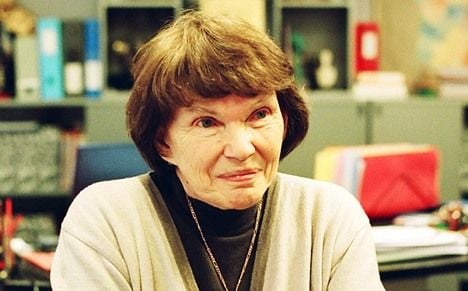 Mitterrand was hospitalised on Friday and later placed in an artificial coma.

“She died at 2 o’clock this morning at the Georges-Pompidou hospital (in Paris),” a source said.

Resistance heroine, humanitarian and widow of a president, Danielle Mitterrand was never content with the ornamental role of a traditional French first lady.

Whether it was backing the Kurds or Tibetans or Cuban leader Fidel Castro, pleading for an equitable share-out of water resources or denouncing slavery, the causes that she defended ardently were numerous.

Born Danielle Gouze on October 29, 1924 in the eastern town of Verdun, her father was a teacher and a socialist who was later sacked by the World War II Vichy government for not betraying Jewish pupils in his school.

In 1940, after German troops occupied most of France, she joined the Resistance as a nurse aged only 17. After the war she was one of the youngest French people to be awarded the prestigious Resistance Medal.

On October 27, 1944 she married François Mitterrand, a fellow Resistance member whom she met when he was on the run from the Gestapo and using the name “Captain Morland”. The couple had two sons, Gilbert and Jean-Christophe.

In May 1981 she became France’s first lady on the election of her husband to the presidency, having accompanied him on his many post-war campaigns.

However she preferred to shun the glittering receptions at the Elysée Palace, and devote herself to human rights work.

Before her husband’s victory, in an interview with news weekly Paris Match, she described herself as a simple woman in comparison to Anne-Aymone Giscard d’Estaing, wife of the outgoing president, who had an aristocratic image.

At the presidential palace she ignored protocol, using her position to devote herself to humanitarian causes.

In 1986 she founded the “France-Libertés” and the organisation, which in October celebrated its 25th anniversary, became increasingly involved in defending human rights and minority rights.

Her work occasionally conflicted with matters of state: in 1990 she had to give up a plan to visit refugees from the contested Western Sahara territory in a camp in Algeria due to strong opposition from Morocco.

Her friendship with Cuban leader Castro also caused friction with the French government, although she said she had persuaded the Cubans to free a number of political prisoners.

In 1992 she escaped an assassination attempt during a visit to Iraqi Kurdistan with her ally Bernard Kouchner, her husband’s health minister and the founder of Nobel Prize-winning aid agency Médecins sans Frontières.

In 1995, after two seven-year terms, President Mitterrand bowed out. In the same year the public learned he had an illegitimate daughter, Mazarine, which Danielle Mitterrand appeared to have taken in her stride.

François Mitterrand died of cancer in 1996, but his widow continued her political and human rights work, notably attending anti-globalisation Social Forums around the world and defending minority groups.

In 2005 she called for a “No” vote in the French referendum on a proposed European Union Constitution. The measure was resoundingly rejected, despite most of the political class backing the “Yes” campaign.

In later years she distanced herself from her late husband’s Socialist Party, which has struggled to compete with the right and has yet to produce another national leader to take up her husband’s standard.

Danielle Mitterrand wrote several books, including “People are above all our brothers” about a rebellion in the Mexican state of Chiapas, and “En toutes libertes”, a biographical memoir.