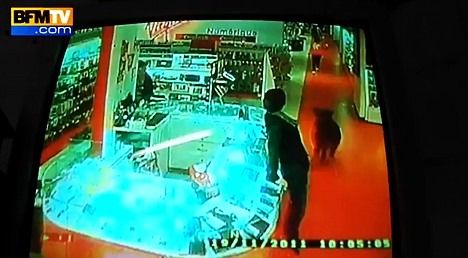 The animal, which is believed to have found its way to the city after fleeing a hunt, made its way through the city’s streets before entering the central shopping area.

The boar was then captured on video surveillance footage entering and racing through the Virgin Megastore as panicked shoppers fled in all directions.

Another shop owner recounted how the 80 kilogramme (176 pounds) animal tried to get into his store.

“All of a sudden there was this crash against the window,” said Emile, the owner of clothing store Groucho Vintage. “The boar then got up and fled in the other direction. It was pretty surprising.”

A police officer told local newspaper La Dépêche that “people were terrorized, the boar as well.”

The frightened animal fled in the direction of the famous Canal du Midi waterway, where it jumped in. After debating whether to rescue it or put it to sleep, police eventually decided to kill the animal.

Shocked readers on the website of La Dépêche criticized the decision.

“Couldn’t they have captured it and let it free in a nature park? Humans disgust me more and more,” said one.

“This poor animal that was just trying to get away without hurting anyone,” said another.