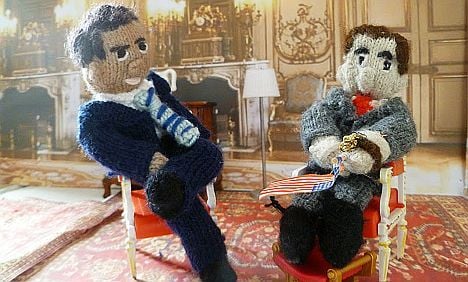 Inspired by the sex scandal around former IMF director Strauss-Kahn, knitting fan Anna launched the blog in the northern city of Lille last May and has since had more than 120,000 visitors to her site.

Nearly every week she posts knitted scenes from the news on the blog, called “Delit Maille” (Knitted in the Act), a play on the name of British tabloid the Daily Mail.

“It’s a way to make fun of something without being too cruel. Wool is soft, nice. You can say anything you want and it’s okay as long as it’s wrapped up in wool,” said Anna, a speech therapist in her 40s who preferred not to have her last name published.

Saying she did it “just for a laugh”, Anna posted her first knitted recreation on May 24, shortly after Strauss-Kahn was arrested in New York after a hotel maid accused him of attempted rape. The charges against him were later dropped.

She said she was inspired by a successful British book — Knit Your Own Royal Wedding — that was released to coincide with the wedding earlier this year of Britain’s Prince William to Kate Middleton.

Styled as an advertisement for a “recreation kit,” the post featured photographs of knitted dolls of Strauss-Kahn and the Guinean chambermaid, Nafissatou Diallo, in a variety of poses.

“The reconstruction kit allows you to play out the different scenarios, to set the protagonists in the scene, to check your theories in a live simulation,” a post under the photographs said.

The blog was an immediate hit, with more than 30,000 visitors in the three days after the Strauss-Kahn pictures were posted.

Inspired by her success, Anna began knitting and posting pictures of other news scenes and the blog took off.

“I’m not a knitting fanatic, it just makes me happy to be able to do what I want with the characters,” she said.

Since the original, Anna has made more than 60 dolls and posted dozens of new scenes.

Another favourite with readers is of former Libyan strongman Moamer Kadhafi shown being warmly welcomed in France by Sarkozy during a 2007 visit.

The Kadhafi doll — featuring a tangle of black hair and pencil moustache — is shown with Sarkozy posing in front of the Eiffel Tower, enjoying a picnic and frolicking in a field.

Sarkozy featured again in a post earlier this month after he was interviewed on French television with US President Barack Obama during the G20 summit in the French city of Cannes.

Waving a small US flag, the French president is shown standing barely half the height of Obama and with his feet dangling above the ground from a chair during the interview.

Not every scene is political. Anna has also taken aim at popular culture.

In a post from October, a recreation of character Don Draper from US television series Mad Men is shown posing in a knitted suit, leaning back with a knitted cigarette and kissing a variety of knitted women.

Anna said the blog is taking up more and more of her time, especially as French political news heats up ahead of presidential and parliamentary elections next year.

“It takes at least six hours to make a doll, and then I set the scene. It’s a real part-time job!” she said.

But despite numerous requests and to the disappointment of fans, the dolls, she said, are not for sale.